on February 08, 2011
From a media release - you should be able to catch their gleefully dark version of alt-country-blues from Montreal to all parts west sometime soon: 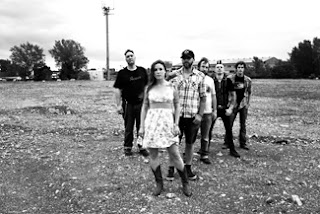 The hoot and holler meter is about to hit an all-time national high as The United Steel Workers of Montreal gear up for their second coast to coast tour in support of their third album, Three On A Tree (weewerk, 2009). Huge in heart, narrative in emotion, raw in nerve, USWM is one of those bands that make you proud to be Canadian. Armed with the infectious tones of their sole brand of blue-collar alt-country, USWM's live shows have achieved a legendary cult-like status across Canada, while amassing a rapidly swelling international audience in the USA and Europe. 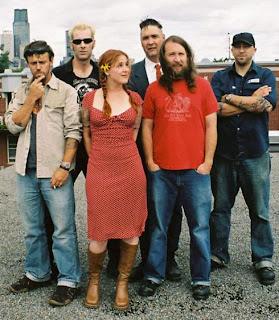 The six-piece Quebec outfit will be dividing their 18 tour dates between urban destinations - including Montreal, Winnipeg, Saskatoon, Calgary, Vancouver and Toronto and more rural locales such as Coleman, AB and Revelstoke, BC.

"We've done quite a bit of road work stretching back more than five years and have always been drawn to the small towns," says Gern, frontman for the boisterous ensemble. "We really take the small towns to heart. But then the big towns and cities really grab our citified side. So long as everyone is dancing, we're pretty happy wherever we're playing."

USWM's self-described "citygrass" sound is a potent mix of ground stompin' blues, raspy voices, banjos, and double bass with gospel infused country ballads. Their stories and songs are filled out with dry wit, tall tales and some outright lies. Rowdier then ever, USWM are ready to stomp holes in the floor of every venue across Canada. Dancing is optional but hard to avoid.

Watch the video for "Meaner Than You" here: