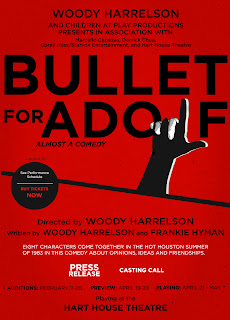 House Theatre, will soon visit Toronto to launch a production of the play Bullet for Adolf. This piece has taken shape through the friendship between Harrelson and Frankie Hyman, who have known each other for almost 30 years. Harrelson and Hyman co-wrote the play, and Harrelson will direct the production, which runs from Tuesday, April 19 through Saturday, May 7.

Eight characters come together in the hot Houston summer of 1983 in this comedy about opinions, ideas and friendships.

“Frankie and I worked construction together in Houston in the summer of 1983. We talked about everything from comic books to existentialism in our conversations. Both of us were broke. Frankie likes to say he's still broke, but I'm doing a little better. The people we got to know that summer had a profound effect on us,” said Harrelson. “The eight characters in this play are based on real people. The names have been changed to protect the not-so-innocent. There wasn't much of a plot that summer, so we started embellishing. Now it's about 3 per cent history and 97 per cent embroidery. The title, Bullet For Adolf, refers to a gun once intended to kill Hitler, which plays a pivotal role in the plot.”

From page to stage, Harrelson looks forward to bringing his vision to life. “We want audiences to bring an open mind to this raucous frolic into murky waters,” said Harrelson. “We debate some important issues, for example race and gender, in what we hope is a provocative and humorous piece. We'd like audiences to 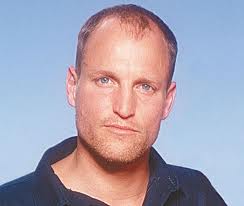 take this home and continue the conversation. That is what a great night of theatre encourages for me."

“A few years ago, I got a call from Marcello asking if I'd like to come to Toronto to direct a play. I directed THIS IS OUR YOUTH two summers in a row. It was during this time that I fell in love with Toronto and it continues to be my favourite city in North America. It's home to a vibrant theatre scene and sophisticated audiences. I love the town and the people. I'm excited to return to Toronto to present what I hope is the first of many plays that Frankie and I will write together.”

Upon the end of the rehearsal process, Toronto audiences will be treated to 17 public performances from April 19 through May 7. The producers and Harrelson chose a hidden gem in the Hart House Theatre. They have also decided that the voices of this new work will be emerging in nature.

“Since this is a new work, we wanted to see what new talents we could find to help shape this story. Of course with Woody’s association, the hope is that the show will get attention, and such, so will these new talents. The notion of finding a new star would be a wonderful end to this process,” said Cabezas. 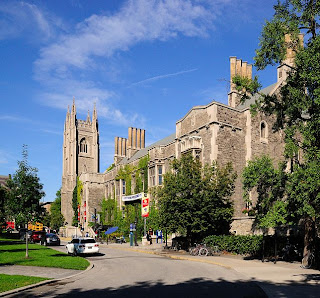