Toronto, Ontario… Angelwalk Theatre, the producers of the Dora-nominated Toronto premiere of Altar Boyz, announced the cast and creative team for its spring production of Jason Robert Brown’s Songs for a 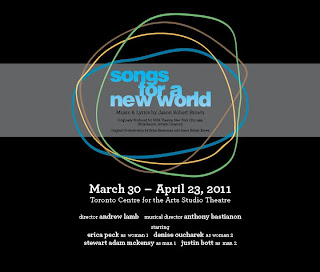 New World. The company will be producing the Tony Award nominated show at the Toronto Centre for the Arts starting March 30 and running until April 23, 2011.

• Tickets are on sale now and can be purchased online at www.angelwalk.ca, through The Toronto Centre for the Arts box office at 5040 Yonge Street or by phone at 416-872-1111.

Leading this stellar cast is Director Andrew Lamb, who is making his Angelwalk Theatre debut. The Artistic Director of Theatre Awakening and the Director of Education and Outreach at Tarragon Theatre, Andrew’s directorial credits include My Mother’s Lesbian Jewish Wiccan Wedding (Mirvish/Fringe Festival); In Darfur (SummerWorks); The Drawer Boy, The Tempest, A Midsummer Night's Dream (Georgian Theatre 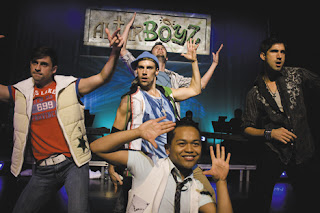 Musical director Anthony Bastianon returns to Angelwalk Theatre for Songs for a New World. Anthony has been the resident musical director at Stage West for 10 years where he has performed in 35 productions including: The Wedding Singer, The Producers, and The Full Monty. Other credits include: Myths and Hymns (Talk Is Free Theatre); Seussical (Theatre Aquarius); Footloose (Stage West Calgary); You’ll Get Used To It (Stirling Festival); Man Of La Mancha and Fiddler On The Roof (Port Hope Festival); Joseph (Drayton Entertainment).

Hailed “one of Broadway’s smartest and most sophisticated songwriters since Stephen Sondheim” by the Philadelphia Inquirer, Jason Robert Brown’s Songs for a New World is his first musical and one of his most popular and most performed musical theatre works. Fans of Jason Robert Brown will recognize popular songs, such as Stars and the Moon, I’m Not Afraid of Anything, Surabaya-Santa, King of the World, and Hear My Song. Featuring a brilliant score of gospel-driven ballads, funky R&B and heart wrenching love songs; Songs For A New World is filled with wit, intelligence and enthusiasm for life’s crazy possibilities.