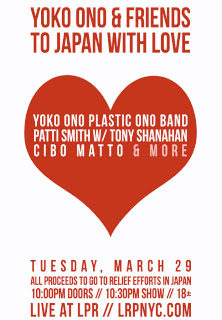 (Le) Poisson Rouge is proud to host YOKO ONO & FRIENDS TO JAPAN WITH LOVE, a benefit for relief efforts in Japan. Performers will include Yoko Ono Plastic Ono Band, Patti Smith with Tony Shanahan, and Cibo Matto. We hope you'll join us for this important benefit event.

oko Ono is a multi-media artist who constantly challenges and stretches the traditional boundaries of sculpture, painting, theater and music. Her seminal performance art, experimental films and collaborative music with John Lennon, and international one- woman shows and retrospectives illustrate her varied career.

In 2009 Yoko revived the Plastic Ono Band concept and recorded her 17th album “Between My Head and the Sky” to critical acclaim. On the Billboard Dance Charts Yoko has had 6 Number Ones. Last year she sold out two concerts at the Orpheum Theatre in LA, and earlier this month appeared at SXSW Festival in Austin, Texas. 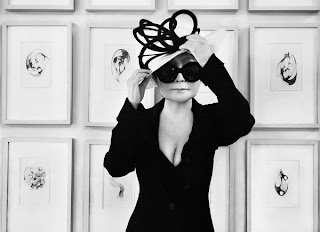 “A Dream You Dream Alone is Only A Dream, A Dream We Dream Together Is Reality”
– Yoko Ono

Tue., March 29, 2011 / 10:00 PM
This is a general admission, standing event.
All proceeds go the the relief effort in Japan.
Tickets available here

(Le) Poisson Rouge is also hosting a benefit for relief efforts in Japan on
April 2 with Taka Kigawa, piano.

We hope you will join us for this event as well.

As a result of the devastating earthquake and Tsunami that occurred on March 11th in Japan, and the subsequent Fukushima nuclear power plant crises, Taka Kigawa will present a Benefit Concert for Japan, the 100% of ticket sales of which will go to The Japan Earthquake Relief Fund created by the Japan Society, which was made possible by the generosity of the venue of this concert, (le) Poisson Rouge. Mr. Kigawa will perform solo piano pieces by leading Japanese composers: Joule by Dai Fujikura, Haiku for Pierre Boulez by Tohio Hosokawa, ATARDECER/A RETRACED by Hiroya Miura, Crystalline by Karen Tanaka; as well as works by composers who had great affection for Japanese culture: Images Book I by Claude Debussy, and Trois Mouvements de Petrouchka by Igor Stravinsky. [The program is subject to change.]

If you would like to make a donation but cannot attend the event, please write to Zan@lprnyc.com 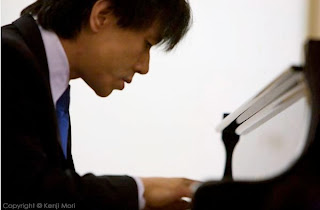 Taka Kigawa, piano
Critically acclaimed pianist Taka Kigawa has earned outstanding international recognition as a recitalist, soloist, and chamber music artist since winning First Prize in the prestigious 1990 Japan Music Foundation Piano Competition in Tokyo, and the Diploma Prize at the 1990 Concurs Internacional Maria Canals De Barcelona in Spain, with such accolades from The New York Times as “Mr. Kigawa’s feat deserves the highest praise, especially since it was combined with such alacrity and sensitivity to the musical material ... brilliantly done … a careful and serious-minded musician, quietly poetic and considerate” and from The New Yorker “Unbelievably challenging program. Kigawa is a young artist of stature.”