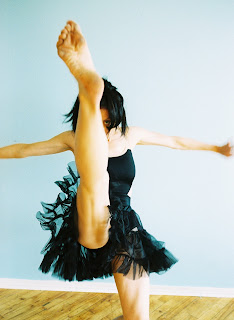 Lucy Rupert, founder and artistic director of Toronto's Blue Ceiling Dance and 2010 Chalmers Fellowship recipient, performs the world premiere of The animals are planning an intervention, an ambitious new solo to original music composed for a string quartet by acclaimed singer/songwriter Sarah Slean. The solo explores thoughts on instinct and mortality, and mines emotion and physical virtuosity, searching for traces of the many animals that live inside us. Living in the boundary between animal being and human being, between profound love and a terrifying sense that maybe nothing means anything, Rupert embodies the imagery of small animals and unheard voices.

The multi-faceted Lucy Rupert has collaborated with dance and theatre artists such as William Yong, Sashar Zarif, Peter Chin, Denise Fujiwara, Andrea Nann, Puppetmongers Theatre, Volcano Theatre, Circus Orange and Sarah Slean. She runs Blue Ceiling dance as a vessel for her interpretive and creative work delving into the shimmery and dark places of human psychology through physics, philosophy and dextrous movement. She is noted for physical and emotional complexity and a mesmerizing presence in performance. Since 2001, she has been working with Theatre Rusticle, perhaps most notably as the ship Titanic in April 14, 1912. She recently worked on two BravoFact films, one as the female lead with music by Sarah Slean and direction by C.J. Wallis. Lucy is co-chair of the Board of the Canadian Alliance of Dance Artists, Ontario Chapter. 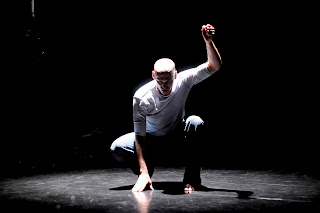 Montreal dancer/choreographer Marc Boivin performs Impact, a hybrid, multidisciplinary piece with visual environment and conceptual design by Jonathan Inksetter, music by Diane Labrosse and lighting design by Yan Lee Chan. Synthesizing Boivin's 25 years of experience, Impact is a captivating solo in which the body is the very hub of expression, a place where everything moves and is moved. The piece examines the connections between people and the magnitude of their influence on one another. Though filled with personal anecdotes, the piece speaks beyond the boundaries of autobiographical narrative. Impact is Boivin's sixth choreography and his first solo for himself.

Dancer, teacher, improviser, choreographer, recipient of the Jacqueline Lemieux prize in 1999, Marc Boivin began his dance career in 1980 at Le Groupe de la Place Royale in Ottawa under the directorship of Peter Boneham. Five years later, he joined Ginette Laurin and her newly-formed company O Vertigo Danse. Since 1991 he has worked as an independent dancer, performing in the company creations and/or the commissioned works of many choreographers, notably Louise Bedard, Sylvain Emard, Jean-Pierre Perreault, Catherine Tardif and Tedd Robinson, among others and with improvisers Andrew Harwood and Peter Bingham. The members of the Regroupement québécois de la danse (RQD) general assembly elected him as president during the 26th annual meeting held on October 23-24, 2010.

"The dancer, whether he is curled up or balanced on one hip on the floor, or occupying space with his wide milling gestures, tracings, or pensive stases, hypnotizes us." - Le Devoir on Impact