This performance by one of the Toronto's preeminent dance companies features three performances of fierce, traditionally inspired and innovative contemporary dance, including COBA's first Canadian 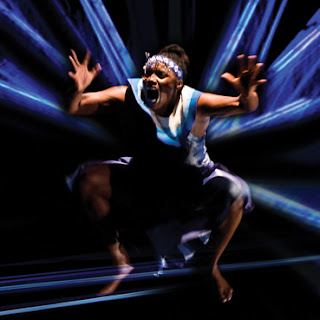 COBA has carved a niche for itself as a performance collective that both educates and entertains. The Collective presents Traditional West African dance, music and folklore; Caribbean Indigenous Folk dance, music and rituals in their purest forms possible for the theatrical stage, while also creating contemporary works developed from an Africanist movement aesthetic that reflects African social realities in a global context. 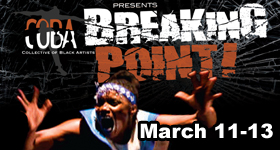 Eddison B. Lindsay) and Mosa Neshama (formerly Kim McNeilly) - four Black dancers fired with the raw passion to fill a void on Toronto's arts scene by constructing a platform for dance creations that reflected their physical and social realities.


If you're a dancer, the company is also holding open auditions in April & June:

OPEN AUDITIONS
JOIN THE COMPANY IN 2011
COBA, the Collective of Black Artists, is holding open auditions for anyone who wishes to join the company in 2011. Dancers must have at least 3 years of intensive training (Modern, Contemporary, etc.), and knowledge of African or Caribbean dance forms is an asset.
Auditions for the Professional Training Program will run concurrently with the open auditions. When you register, please be sure to indicate your interest in either program.
COBA, the Collective of Black Artists, is dedicated to creating and presenting the finest traditions in dance and music that celebrate and reflect an Africanist aesthetic. 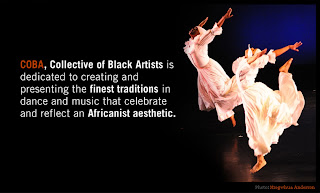