on March 15, 2011
Update March 25:
I checked out Baby Boyz on opening night last night - an entertaining mix of theatre and dance - or dancehall, more properly, in all its hips swiveling glory, although the piece doesn't shy away from dancehall culture's violent streak either. Highlights include the fantastic kid (Khauneil Thomas) who plays Stripes as a child, the ensemble dance pieces, and none other than Afua Cooper doing spoken word as only she knows how. Still time to see it tonight or tomorrow. 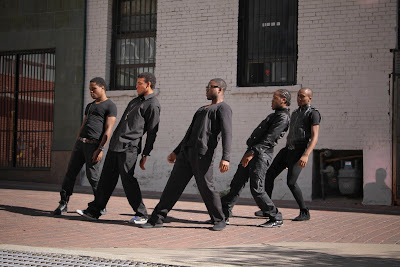 as part of Harbourfront Centre's NextSteps, choreographed by Kevin A. Ormsby and Trevor Brown, written by Joseph Jomo Pierre and directed by Dian Marie Bridge with artistic consultation by Weyni Mengesha.

Three Boyz, Three Countries & One Dream delves into the lives of three young men from different cultures - Africa, Jamaica and Canada - as they find a shared sense of worth and purpose through dance. None could guess where their dreams would lead - or how their aspirations would impact their lives and the lives of those around them.

A tapestry of dance and theatre, the story in Three Boyz, Three Countries & One Dream is revealed through a diverse range of urban dance forms blended with text and highlights the artistry in dancehall and hip-hop, progressively connecting both genres to dances of African and contemporary influences.

The Brampton-based Baby Boyz Dance Group, are a group of seven diversely trained young male dancers bursting with talent who are focused on making a difference in their own lives and the lives of others through the medium of dance. Under the tutelage of Baby Boyz founder and Artistic Director Trevor Brown, the company incorporates many genres, weaving a creative identity that is athletic and explosive and dedicated to the creation of original works that celebrate the power of the imagination while incorporating important social messages. They are dedicated to the betterment of the community and promote education through dance to at-risk youth to teach them the importance of learning essential life lessons such as discipline, focus, organization and positivity. 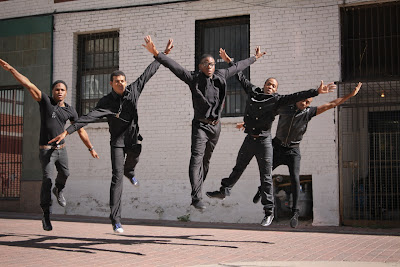 Baby Boyz Dance Group have performed all over the world alongside some of the biggest names in entertainment, and winning numerous competitions throughout North America. In 2009, they performed at the Legends of Hip Hop concert in which Chris Brown participated. In 2007 they performed at the prestigious Panafest festival in Ghana, West Africa. They have performed with such other artists as LL Cool J, Elephant Man, Rita Marley, and others. The group has been featured in music videos for J-Diggz, K-OS and Rihanna, and have appeared in films including Beat the World, How She Moves, Take the Lead and the 50 Cent production Get Rich or Die Trying. Baby Boyz is the recent recipient of the Planet Africa Rising Star Award. The Toronto Star named them as one of the 10 best in dance in her 2006 Top 10 look back while The Gleaner called them "electrifying, energetic and dynamic." And in 2007, Paula Citron of the Globe and Mail said they were "definitely a group to watch."

dance Immersion is an organization with a mandate to produce, promote dancers and dances of the African Diaspora through presentations while providing skill development and networking through workshops, youth arts programs, collaborative projects and forums. This is its 16th annual Showcase presentation.

Kevin A. Ormsby has been dancing in Jamaica, the United States and Canada for over twenty years. His unique dance history has taken form from blending the magnificent influences of Afro-Caribbean culture with modern and classical dance techniques. He worked as the Assistant Artistic Director of Ballet Creole and prior to this, from 2001 to 2006, was a member of the internationally renowned Garth Fagan Dance of Rochester, N.Y. (Among its numerous accolades, Garth Fagan is the choreographer of the Broadway musical The Lion King.) Ormsby was featured in more than 17 of the company's works, many of which toured extensively throughout the U.S., Canada and Europe. In April 2008, Ormsby founded his own dance company, KasheDance, of which he is Artistic Director.

Joseph Jomo Pierre is an actor and playwright. A graduate of York University's Theatre Department, he received the K.M Hunter Artist Award for Theatre in 2007, produced Born Ready, Pusha-Man (both presented at Theatre Passe Muraille) and Hip-Hop (Who Stole the Soul). He is currently playwright-in-residence at Factory Theatre (2010) and has been the playwright-in-residence at Obsidian Theatre (2008), Theatre Passe Muraille (2006) and a member of the playwrights team at Tarragon Theatre (2007-08). In addition, he was a consulting director in Allan King's 2006 TIFF documentary Empz 4 Life, which was in part inspired by Born Ready.

Dian Marie Bridge is a theatre director, writer and producer. She recently directed a workshop reading of Clicking Venus by Meghan Swaby as part of the Groundswell Festival and will return to the Stratford Shakespeare Festival for a second season as assistant director on The Misanthrope where she was a member of Stratford's inaugural Michael Langham Workshops for Classical Direction. Named an "Outstanding Director" by NOW Magazine for Thank You at the 2005 Toronto Fringe Theatre Festival which they also named an "Outstanding Production," she was Intern Artistic Director at Obsidian Theatre and is a founding member of Toronto's Cric Crac Collective. She was also assistant director on the Mirvish production of 'Da Kink in My Hair.

Weyni Mengesha is an award-winning director/dramaturge. She received acclaim directing trey Anthony's 'da kink in my hair, helping build it into an international sensation. Mengesha has gone on to make a name for herself with other credits including directing d'bi.young.anitafrika's play blood.claat, for which she and the production received major critical acclaim and numerous awards across Canada. She directed Lorraine Hansberry's A Raisin in the Sun, recently remounted for Soulpepper Theatre; garnering the production a place in Toronto's NOW Magazine's "Top Ten Theatre Productions of 2008."

Here's a video snippet of Baby Boyz I shot at Harbourfront last summer: