Toronto, ON... A piece of paper can shape your life. It can record your history or build something new. Cahoots Theatre Company is thrilled to bring together an all-star, award winning cast and creative team 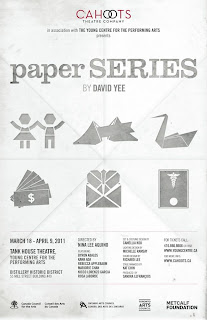 for the world première of David Yee’s paper SERIES.

• paper SERIES will open March 21, 2011 for a limited run at the Young Centre for the Performing Arts’ Tank House Theatre in Toronto’s Distillery Historic District.

From an ill-advised waiter who finds new uses for fortune cookies, to an orphan who creates parents out of paper dolls, to a cab driver who replaces his taxi license with his medical credentials. Written by Dora Mavor Moore Award and Governor General’s Literary Award nominee David Yee, paper SERIES examines how we use paper to create, amuse, define and communicate. This is a touching and evocative production that changes tune with every fold.

paper SERIES was developed with the assistance of Diaspora Dialogues and Factory Theatre’s Performance Spring Festival, and was workshopped at the 2007 SummerWorks Festival, where NOW Magazine named it one of the Outstanding Productions of the festival. paper SERIES was published in Canada’s first Asian-Canadian drama anthology, love & relasianships (Playwrights Canada Press) in 2009.

Director, dramaturge and playwright, Nina Lee Aquino, directs an outstanding ensemble of Canadian talent. As a director, Nina Lee Aquino has won the John Hirsch Prize, and has been nominated for four Dora Mavor Moore Awards. Nina is the Artistic Director of Cahoots Theatre Company. 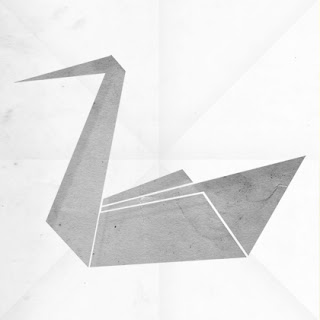 Cahoots Theatre Company is dedicated to the creation, development and production of new works that investigate the complexities of Canada’s cultural diversity, and examine the intersections of these cultures. Our work questions, challenges and transforms our notions of contemporary Canadian life, and explores our evolving connection to the world around us. It encourages us to consider and honour our history, while stepping boldly into the future.