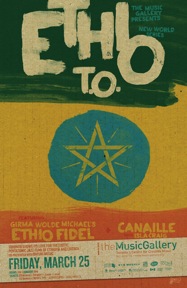 Part of the New World Series
Toronto shows its love for the exotic, pentatonic jazz-funk of Ethiopia and Eritrea
Co-presented with Batuki Music Society

Over the past decade, “The Golden Age” of Ethiopian sounds of the ‘60s and ‘70s has been brought closer to the mainstream by high-profile fans as diverse as Jim Jarmusch, Budos Band and Kanye West, all enchanted by its exotic combination of funky rhythms and eerie pentatonic modes.  Artists of that era, most notably Mulatu Astatke, have benefitted from this international attention.

Toronto contains the second largest Ethiopian population in North America, and the sounds of Ethiopia and Eritrea hold a special place in the city’s musical landscape. Moreover, the community has a very visible downtown presence in Bloorcourt Village. This is likely a contributing factor in its rich musical traditions resonating with the high concentration of musicians of all stripes living in the neighbourhood.  If you’ve experienced a night out in one of Bloor and Ossington’s clubs, chances are you’ve seen bands featuring Girma Wolde Michael. 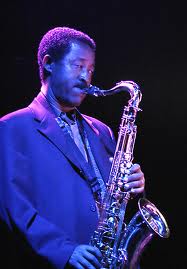 Girma Wolde Michael’s Ethio Fidel
A saxophonist who studied with Mulatu Astatke and Getachew Mekuria (who performed in Toronto with The Ex in 2009), Wolde Michael is one of many musicians from the Golden Age residing in the GTA. Girma is the first-call bandleader for visiting stars such as Mahmoud Ahmed, and also leads the Ethio Stars band. He will be drawing from the repertoire of the Golden Age with his Ethio Fidel band for this Music Gallery presentation.

This video clip has a great solo by Girma Wolde Michael - check it out: