Afro-Cuban All Stars Spring 2011 U.S. Tour
A Secret Satellite, a Flying Piano, and a Cuban Maestro: A New Era of Cuban Musical Performance in America 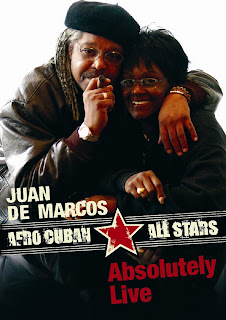 A secret satellite. A flying piano. A Cuban maestro who combines the musical sixth sense of Quincy Jones with the international savvy of James Bond. These are the stories behind the U.S. return of Cuban music after half a decade, thanks to the Juan de Marcos & Afro-Cuban All-Stars national tour which will bring Cuba's uniquely addictive sounds to over a dozen cities including New York, Atlanta , Nashville, Tampa, Seattle and many more in between.

The man behind the Buena Vista Social Club, Cuban bandleader, producer, and impresario extraordinaire Juan de Marcos, has been forced to lay low on the American circuit since 2002, when politics slammed the door in the face of some of Latin music's most adored artists. "We used to perform in the U.S. every year starting in 1994, when I went for the first time with my group, Sierra Maestra. We toured the whole country. Then musicians from Buena Vista started to tour, with great success and their own bands we put together, for many years. But in 2003, everything stopped."

Yet nothing can stop de Marcos, or the vitality and power of his beloved country's music, the striking, catchy distillation of the island's seven distinct African and European cultures. That's why he's brought together the cream of Cuba's expatriate musicians, friends, and long-time collaborators who happen to live abroad and are not subject to the current INS restrictions for Cuban residents traveling to and performing in the U.S. 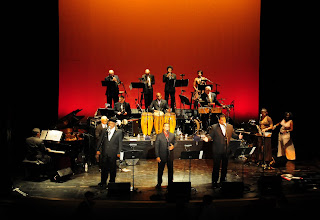 This isn't the first daunting hurdle de Marcos has cleared with consummate ease. De Marcos helped Ry Cooder turn a cancellation fiasco into the global musical triumph that became the Buena Vista Social Club phenomenon by gathering the finest neglected stars of Cuba 's bright yesteryear. During the first Buena Vista Social Club recording sessions, de Marcos discovered that talented Afro-Cuban veteran musician Rubén González had no piano to play, and hadn't had an instrument for years. Juan de Marcos had one flown in from London.

When de Marcos first approached singer Ibrahim Ferrer to record with Buena Vista, Ferrer kept him waiting a half hour while he finished polishing a batch of shoes, the work of his subsistence during the years his voice had been forgotten.  After Buena Vista had become a worldwide household name and de Marcos got fed up with managing his international projects via the island's sluggish dial-up, he rigged up a satellite connection under the radar.

Now, he's set his sights on bringing a new generation of talented Cuban singers, instrumentalists, and composers into the world limelight, with America as a long-awaited first stop. Many of the musicians in the Afro-Cuban All Stars will be delightfully familiar to fans of artists like Ferrer or Omara Portuondo, as they formed the core of the unique ensembles that backed the Cuban music greats who the world rediscovered through de Marcos' efforts. Others, such as percussionist Calixto Oviedo, have backed international stars from James Brown to Sting. The band will be playing new songs as well as a few carefully chosen and well-loved Cuban favorites. 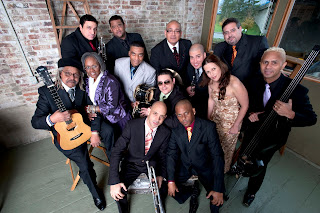 In putting together the band, de Marcos has aimed to find not only stellar musicians with the right passports, but also just plain good people with the right energy.  "The energy that moves around the band is very important because you physically transmit to the audience," de Marcos explains, drawing on his doctorate in engineering to explain the special dynamics of Cuban performance. "This isn't some mystical force; it's all about the electromagnetic waves that the brain transmits and receives through the pineal gland. When you have really good positive energy, the audience gets it."

The incarnation of the Afro-Cuban All Stars on this tour brings together top Cuban musicians from the Americas and Europe in what promises to be the opening salvo in a new era of U.S.-Cuban cultural exchange. "It won't be long before the new U.S. administration allows for more cultural exchange. This tour stands to be the first in a new period of openness and appreciation for Cuban music, and perhaps the beginning of the end of the embargo itself," de Marcos smiles.

As its name implies, the Juan de Marcos and Afro-Cuban All Stars is more of a project than a band. Like an expert chef, Juan de Marcos changes ingredients with the seasons and the dinner guests. "This band will sound and even behave exactly like one coming straight from Havana," says de Marcos with a laugh. "Cubans never change and if you've been in Miami you'd know what I mean; dominos, mojitos, pork, chicharrónes, and all!"  The plat du jour for the 2011 tour includes band members culled from the cream of the Cuban diaspora around the globe.