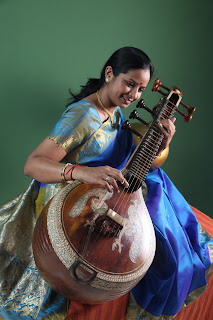 Dr. Jayanthi Kumaresh picked up the phone one day and had an epiphany. “I heard myself responding to different calls differently, using multiple voices and personalities,” the world-class veena player explains. “When you talk to your son, husband, teacher, colleague, or your student, with each role, your intonation changes so much. So I thought, ‘Why not make the veena do this?’”

an elegant, powerful exploration of the many sides of India’s national instrument, with its overtones, unique resonances, and dozens of strings. A seventh-generation musician with decades of training, performing, and recording of Carnatic (South Indian) classical music to her credit, Jayanthi was perfectly poised to create a set of pieces that allowed the veena’s multiple qualities to emerge. 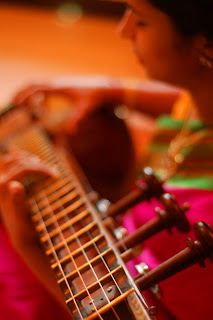 The urge to show the veena in a new light came when Jayanthi played a festival in France several years ago. The promoter, new to Indian music, listened to a CD of Jayanthi accompanied by traditional percussion and was delighted—but confused. “He said, ‘The music is awesome. Now, which one’s the veena again?’” Jayanthi recalls with a chuckle. “I could relate to where he was coming from. The sitar and tabla have been presented in many beautiful ways, and people worldwide recognize their sound. I knew I needed to present the veena’s grandeur of tone in all its purity. I needed to make an album with just veena.”

Jayanthi understood that a solo veena album would not capture the full breadth of her instrument’s expressive and sonic possibilities—its rich bass, percussive facets, sympathetic strings, and delicate upper range. So she headed to the studio, telling the engineer to brace himself as she laid down track after track of different rhythmic and melodic elements, turning to the two dozen veenas she owns to find just the right sound.

After seven overdubs, she found the perfect balance between the elements, and the process suggested what material she should explore using her newfound approach: “Once I had the formula right, I had to figure out what to play.”

The pieces that emerged once Jayanthi found her footing move from contemplative layered arpeggios to energetic, complex melodies, from percussive bass grooves to dancing, shimmering tones (“Multiple Duality”). The effect is welcoming to the listener unfamiliar with Indian classical music, yet strikingly appropriate to fans of straightforward classical performance. 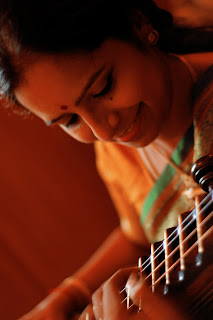 Jayanthi’s music resonates beautifully in multiple ways thanks to her long experience. “My background helped me approach these pieces with poise and dignity,” she relates. “I didn’t want to rush anything, especially on tracks like ‘Wandering in Dimensions,’ and took them step by step.”

The tracks draw on her deep knowledge of Carnatic music’s system of rhythmic cycles (tala) and melodic patterns (raga). “Indian music has this treasure house of melodies, or ragas that are created using a particular set of notes in particular order. Scales don’t become ragas until they have life breathed into them,” Jayanthi notes. “But that creativity has a boundary, as well as a particular emotion. It’s as if you have three colors to use in a painting. You can still paint anything you want, even if you only use three colors.”

This bounded creativity shines in pieces like “Strings with No Ends,” a slowly accelerating tanam, or improvised work that’s “melodically rhythmic and rhythmically melodic,” as Kumaresh puts it. Or in pieces composed by Jayanthi’s youthful nephew Abhishek Raghuram or by her violinist husband R. Kumaresh. Both work primarily on other instruments, bringing an exciting freshness and challenge to her endeavors. “If I’d had composed everything myself, I would have focused solely on what might sound nice on the veena,” she reflects. “Abishek, for example, composed melodies without thinking at all about my instrument.”

The process of recording also revealed new facets of the veena, something that Jayanthi has relished bringing to her live classical performances. The high-quality recording and mastering uncovered microtones and resonances Jayanthi had never heard so distinctly before, elements she now plays with in concert.

It also brought out a bolder dimension of Jayanthi’s musical personality. “Before this album, I would wonder when I played the bass strings in a particular way if I was sounding too much like an electric guitar,” she muses. “I always felt a bit shy. After making this album, though, I found it was very cool. Now I love it.”