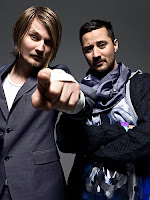 The second single, "Forsaken Cowboy", from Röyksopps latest album, Senior is out now!

Listen to both "Forsaken Cowboy" and the new B-Side "Keyboard Milk" here: