Batuki Music Society and the Gladstone Hotel team up together for the 3rd year to present the World Concert Series that takes place on the first Friday of each month from 7 to 10 pm. at the Melody Bar at the Gladstone Hotel located at 1214 Queen Street West, Toronto. The concerts are free events. The series features a diverse lineup of performers with a strong focus on African music. 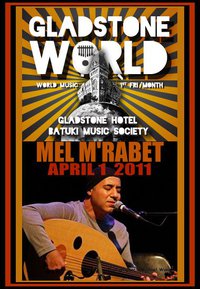 M El M'rabet. A child of musicians, he grew up Granada, Andalusia, where he began studying the Oud as a child. Living where he did, it's not surprising that he was immersed in Andalusian music or that he was drawn to the traditions of its constituent elements: the music played by the East Indians, Turks, Kurds and Armenians, as well as music of the Roma, especially flamenco...

M El M'rabet has become a virtuoso on the Oud and a highly respected singer and composer, but he is not a preservationist. Mastery of the traditions and powerful technique has resulted in a very distinctive style of playing that reflects both his travels and his desire to extend the possibilities for the instrument. To that end, he has even begun to help build Oud with his brother Otman Al Merabet, to enhance the sound and range. M'rabet, with his roots deep in Andalusia, has become an artist who personifies a proud living tradition. 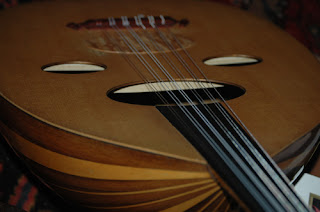 Blending Andalusian-North African folk melodies with Flamenco, blues, a sprinkle of Jazz and compelling grooves, M'rabet creates compositions that reflect the richness of the Canadian cultural climate and he contributes to the performing arts landscape in his community and nationally. M'rabet has released 4 CDs, Andalusian legacy, SoloSoul, Journey of Ziriab and Andalo and has toured extensively across the U.S., Canada, Spain, France and Germany. He has also collaborated with many great artists such as Omar Sosa, Salif Keita, Steve Potts, Cheb Mami, Cesaria Evora and Chano Dominguez. He is recognized among his peers as a virtuoso, versatile and innovator.

Saba and Rumbi from Jaivah Nouvel Expose Dance Troupe, a Toronto dance company specializing in traditional and contemporary dance from Ethiopia, Eritrea, Congo, Southern Africa and Egypt. Honoring tradition and innovation equally, we pair our original choreography with the freshest beats from the top of today's African music and live instruments on occasion. Jaivah strives to expose audiences to dance styles whose beauty has for too long gone unseen or unappreciated among many.

Jaivah features guest artist Fumu Jahmez a performing artist who specializes as a dancer, singer, poet and writer. Born in the Democratic Republic of Congo and grown up in Canada, Jahmez is currently an apprentice with COBA.

Batuki Music gratefully acknowledges the support of the Ontario Arts Council and the Gladstone Hotel.