Glenn Gould Laureate to be announced April 1 in Toronto 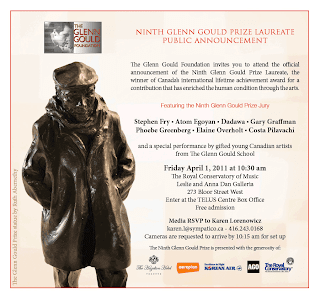 “We are pleased to convene this accomplished and eclectic group of jurors to select a laureate whose life’s work manifests the values of innovation, inspiration and transformation embodied by the Glenn Gould Prize,” said Brian Levine, Executive Director of The Glenn Gould Foundation.

The Glenn Gould Prize - referred to as “The Nobel Prize of the Arts” – is awarded biennially to a living individual for a unique lifetime contribution that has enriched the human condition through the arts.  A tribute to Glenn Gould’s artistry and his multifaceted contributions to culture, the prize promotes the vital connection between artistic excellence and the transformation of lives.  The winner receives $50,000 (CDN) and chooses an outstanding young artist to receive The City of Toronto Glenn Gould Protégé Prize of $15,000 (CDN). The laureate’s work is honoured through a series of public events presented within the year.

The Glenn Gould Foundation honours Glenn Gould’s spirit and legacy by celebrating brilliance, promoting creativity and transforming lives through the power of music and the arts with the Foundation’s signature activities, including The Glenn Gould Prize.  For more information on the foundation, prize and jurors visit www.glenngould.ca .
arts award glenn gould glenn gould foundation royal conservatory of toronto event