Like all the best pop music, Deerhoof has always been strikingly new and yet strangely familiar. Melodic beauty, as if out of a half-remembered dream, is set against flashes of brilliant innovation that 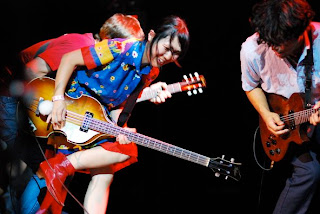 seem to be as much of a surprise to the band as to the listener. With Deerhoof every song is an adventure. Classic rock, J-pop, jazz, classical, and noise suddenly become inseparable, as if no stylistic barriers had ever truly existed. This is reflected in their equally wide following: Ask five fans to pin down Deerhoof's sound and you'll get five completely different answers.

Their mid '90s debut saw them being branded "too noise for pop" and "too pop for noise." But even as this combination eventually proved basic to the sound of contemporary indie rock, lifting the band out of obscurity in the process, Deerhoof has remained a genre unto themselves. From the cartoon surrealism of Milk Man (2004) or Friend Opportunity (2007) to the gritty realism of Apple O' (2003) and Offend Maggie (2008), they have invented their own instantly recognizable way of writing, playing and recording a song.

They are a study in contrasts. Vocalist/bassist Satomi Matsuzaki's light, cool delivery, and the laser beam clarity of her melodies, create a magical tension with her bandmates' ragged power and hyperexpressivity. Underlying any seemingly mythic tendency in the lyrics is a very human concern with worldly love and friendship. And while they can pull out all the stops with some breathtaking songwriting sophistication and virtuosic sparkle, always present is an unpretentious Deerhoofian joy. Ultimately their only rule has been to throw away the rules. As successful as they've become, they are an inspiration to their ever-growing audience because they've stayed DIY, stayed positive, and stayed pure.

Ichi
Ichi, from Nagoya in Japan, takes the notion of a one-man band to new limits - combining steel-drum 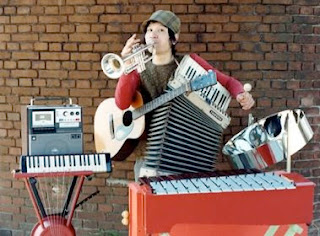 with ping-pong balls, tape-loops with double bass and trumpet with bongos, all in the space of one short set. Somehow there's an ancient, ritualistic feel to his performances, he's like the misplaced leader of a tribe and perhaps he will be - it's this kind of excellence and innovation which inspires a cult following. At the same time, his music is so playful and unusual, it gives you the feeling that you're witnessing something entirely new. It's fun, it's danceable, it's exciting. His album, 'mono' is released on the Japanese label Coup, and if you heard the CD before you see him play, you'd never believe he reproduces it live, but he does (minus the mewing from his two cats, some atmospheric sound recordings and contributions from some other friends). Ichi is also a 20-year long member of the Nagoya new-wave band 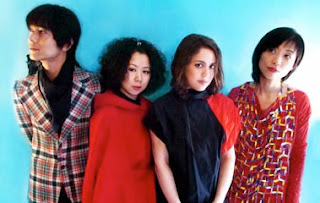 Nohshinto, has toured extensively as a solo artist in Japan, and has played with Shugo Tokumaru & Asa-Chang and Junray.

If By Yes (Yuka Honda + Petra Haden)
A new group featuring the extraordinary talents of Petra Haden on vocals and Yuka Honda on keyboards / samplers, who both draw from pop music and the avant garde. Recently joining If By Yes are drummer Yuko Araki and guitarist Hirotaka "Shimmy" Shimizu, known for their work with Cornelius and Mi-gu. If By Yes take their name from a poem by E.E. Cummings.

Photo of Deerhoof performing at LPR in 2009 by Annie Lesser.