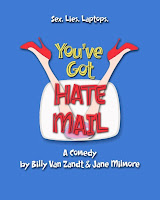 Billy Van Zandt & Jane Milmore ("Silent Laughter," "Love, Sex, and the I.R.S.," "A Night at the Nutcracker") bring their e-mail comedy of errors, "You've Got Hate Mail," back to the Triad after a spate of standing-room-only performances this fall & winter. Performances begin March 18 at the Triad theater located at 158 West 72nd St, NYC.

Hailed by critics (“The perfect bedroom farce…expertly directed…riotously enacted by a five-person ensemble!” –NY Post) (“LOL…The audience is guaranteed to do just that – Laugh Out loud!” -Star Ledger) (“It doesn’t get better than this!” –Show Business Weekly) (“A rapid-paced romp with a millennium twist! Hilarious!” –Curtainup.com), (“Behind this

Love "bytes" all when an extra-marital affair goes horribly wrong, thanks to a juicy e-mail left sitting on a desktop. The story is told entirely in e-mails from laptop computers, although the play does manage to have an unforgettable chase scene - thanks to Blackberries and iPhones.

Van Zandt & Milmore are the authors of 23 plays published worldwide with Samuel French and translated into multiple languages around the globe. Van Zandt's solo play "The Property Known as Garland," which starred Adrienne Barbeau as Judy Garland, broke house records at the Actor's Playhouse in its initial Off-Broadway run.

Their television and film projects have brought them Emmy nominations, People's Choice Awards and NAACP Image Awards for their writing and producing on "I Love Lucy: The Very First Show," "Martin" and "The Hughleys."

The Triad is a two-drink minimum/cash only venue. The next scheduled Off-Broadway performance of You’ve Got Hate Mail will be Friday, March 18. Beginning on that date, the show will perform weekly every Friday night at The Triad with a 7:00 p.m. curtain.