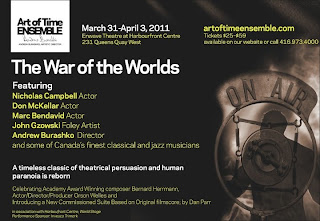 proudly presents The War of the Worlds, a celebration of the music of Academy Award-winning film composer Bernard Herrmann to mark the centenary of his birth.

• Featuring some of Canada's most outstanding artistic talents, The War of the Worlds runs Thursday, March 31 through Sunday, April 3, 2011 at Enwave Theatre.

Herrmann was the musical director on Orson Welles' radio adaptation of The War of the Worlds, originally broadcast on October 30, 1938. Aired as a hoax, it famously caused widespread panic as its news bulletin format led many listeners to believe a Martian invasion was actually happening in real time. Art of Time is using the same script.

Also on the program is the world premiere of an instrumental suite - Herrmannthology - newly composed by Dan Parr based on 20 of Herrmann's film scores, accompanied by a live mix of stills and footage from the various films. One of Hollywood's most iconic composers, Bernard Herrmann was responsible for most of Alfred Hitchcock's film scores as well as the music for Orson Welles' films and radio dramas including Hitchcock's Psycho, Vertigo and North by Northwest and Welles' Citizen Kane and The Magnificent Ambersons. He also penned the music for Martin Scorsese's Taxi Driver, the original Cape Fear (1962) and The Day the Earth Stood Still (1951). 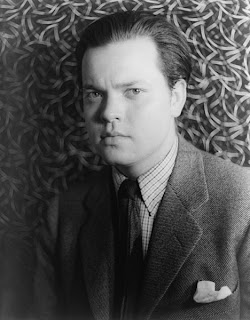 A multiple Gemini Award-winner for his leading role in the popular television series Da Vinci's Inquest, and with over 40 film and television starring credits, Nicholas Campbell recently earned accolades in Company Theatre's Through the Leaves at Tarragon Theatre.

Award-winning writer and actor Don McKellar has been associated with some of the most acclaimed film and television shows in Canada including collaborations with director Bruce MacDonald on Roadkill and Highway 61 (actor and screenwriter), This Movie is Broken and Trigger; authoring screenplays for Thirty Two Short Films About Glenn Gould and The Red Violin; acting in television treasures such as Twitch City and Slings & Arrows; winning a Genie Award for his performance in Atom Egoyan's Exotica; winning a Tony Award for Best Book of a Musical for The Drowsy Chaperone, and more.

Up and coming actor Marc Bendavid was recently seen in Art of Time Ensemble's Shakespeare: If Music Be and Factory Theatre's The Madonna Painter.