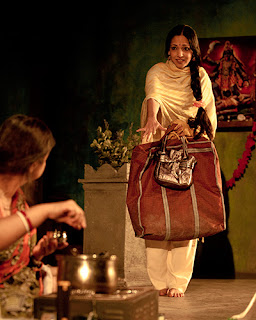 Brothel #9 is a powerful production that looks deep into the heart of India's sex trade, and by extension into the often shocking disparities of a poverty riddled society. While there are flashes of humour here and there, overall it is definitely not a piece for the faint of heart.

Beautiful Rekha (Pamela Sinha) arrives at Brothel #9, dropped off by a brother-in-law who has told her it's a factory making ballbearings. Imagine her surprise when she finds out she's actually been sold for 2100 rupees to Birbal (Ash Knight) a second generation pimp, and expected to begin working right away.

Anusree Roy is the solid heart of the play as the veteran Jamuna, hard-edged and matter of fact about the harsh world they inhabit, a world where women are so far down on the ladder they can be bought and sold without compunction. She calmly cooks and then eats supper after she "gives" Rekha to Salaudin (Sanjay Talwar) the corrupt policeman and he takes Rekha by force. The girls will be found and brought back if they leave, and Neeta, the one who ran away, is found beaten to death by her lover. Jamuna manages by drinking and cheerfully making money. She looks forward to her twice weekly visits from Salaudin, with whom she's cobbled together a relationship of sorts, determined to be "happy" in the midst of this unthinkable realm. It's a world where there are no choices - or so it seems. 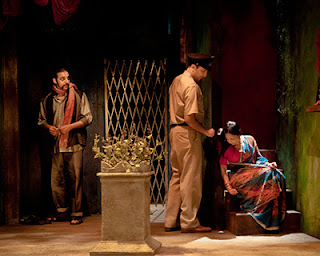 Pamela Sinha's hapless newcomer has a difficult task in the beginning to really capture the sense of anguished surprise. The role becomes stronger towards the end as Rekha herself becomes stronger and adapts, hardening against the rough edges of her new reality, and then begins to make her own decisions about her life. She also serves as the voice of the outside world here, the one to question what Jamuna has so wholeheartedly accepted, and pass judgement on her.

The details ring true in this story, as researched by Roy herself on trips to India where she interviewed the real women who live in the world they'll never show you on those Incredible India travel advertisements. You'll learn things you probably never wanted to know, including uses for toothpaste that (I sincerely hope) will shock.

What's especially poignant about the piece, and the genius of the play itself, is the evolution of these characters - Rekha from victim to empowered survivor, and the cracks of vulnerability that show in Jamula's tough as nails veneer. Even the male characters, who in the beginning seem unremittingly abusive, eventually reveal deeper dimensions. Salaudin becomes obsessed with the new girl, to the point he 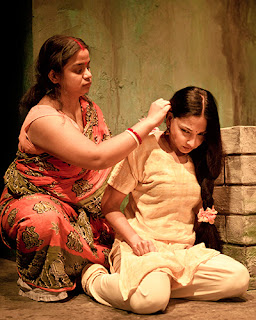 neglects Jamula, and the rest of Jamula's regular clients begin to follow suit, setting up rising tensions that come to a conclusion that in the end doesn't really pass judgement on any of them. These are people who are simply trying to survive and deal with the hand life has dealt them.

The production's sense of authenticity is aided by an ingenious set design by Shawn Kerwin that turns the stage into the main room of the brothel, with stairs going up either side, festooned with hanging laundry. It's an absorbing night of theatre you likely won't be able to forget. 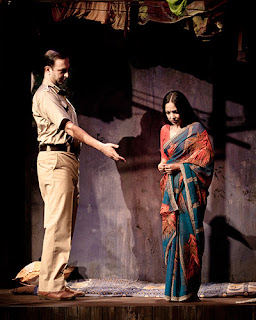 Due to its subject matter, Brothel #9 is not recommended for audiences under the age of 14 years.