on March 08, 2011
From a various sources - this sounds like a really exciting play:

Robin Williams Makes his Broadway Début in
A Bengal Tiger at the Baghdad Zoo
by Rajiv Joseph
Opening in previews March 11, 2011

Oscar® and Emmy Award® winner Robin Williams makes his Broadway debut in the New York premiere of BENGAL TIGER AT THE BAGHDAD ZOO.

A lyrical, haunting new play set against the backdrop of the war in Iraq, in which the lives and, in some cases, the afterlives of two American soldiers, an Iraqi translator, the ghosts of Saddam Hussein’s sons Uday and Qusay, and a Bengal tiger all intersect in a surreal, darkly humorous and gently balanced view of war and its aftermath. “Bengal Tiger at the Baghdad Zoo” had its world premiere at Center Theatre Group’s Kirk Douglas Theatre in May 2009. 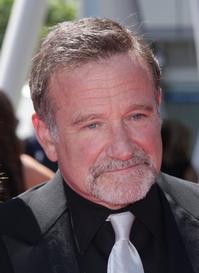 In Rajiv Joseph's savagely funny work, a tiger haunts the streets of present day Baghdad seeking the meaning of life. As he witnesses the puzzling absurdities of war, the tiger encounters Americans and Iraqis who are searching for friendship, redemption and a toilet seat made of gold.

This groundbreaking play comes to Broadway for a strictly limited, sixteen-week engagement directed by Tony Award® nominee Moisés Kaufman. Glenn Davis, Brad Fleischer, Hrach Titizian, Sheila Vand, Necar Zadegan and Arian Moayed - all of whom appeared in BENGAL TIGER AT THE BAGHDAD ZOO during its two engagements at the Center Theatre Group in Los Angeles in 2009 and againin 2010 - will join Mr. Williams in the Broadway production.

The play was a finalist for the 2010 Pulitzer Prize for Drama, and in December 2010, playwright Rajiv Joseph was awarded a $50,000 unrestricted USA Fellowship for 2010 from United States Artists, a national grant-giving, arts advocacy organization.