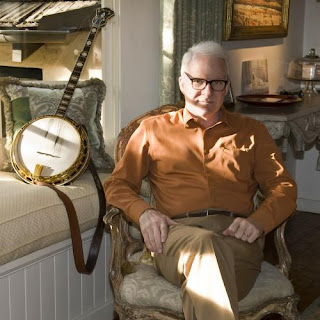 Steve Martin, one of the most diversified performers in the motion picture industry today—actor, comedian, author, playwright, producer, musician – has been successful as a writer of and performer in some of the most popular movies of recent film history.

Martin will release his second full length bluegrass album Rare Bird Alert on Rounder Records. He will be joined by the Steep Canyon Rangers, who toured extensively with Martin over the last year. Rare Bird Alert features 13 new Martin-penned tracks, including a live version of “King Tut,” and was produced by Tony Trishka.  Paul McCartney and The Dixie Chicks make special guest vocal appearances on the album.  Martin co-wrote two of the CD’s songs with the Steep Canyon Rangers.

Since becoming involved in the modern bluegrass scene, Martin has been impressed with the overall level of musicianship that exists in the world of the professional and semi-professional player. As such, in 2010, Martin established The Steve Martin Prize for Excellence in Banjo and Bluegrass, an annual award which brings recognition to an individual or group for outstanding accomplishment in the field of five-string banjo or bluegrass music. In its inaugural year, the award was presented to Noam Pikelny.

Here's Steve and the Steep Canyon Rogers with a live version of King Tut: