So I'm in the Toronto Complaints Choir - a very cool community based project that took complaint suggestions from you the public (they received thousands!) Genius composer Bryce Kulak turned them into a fab song and has been the most patient choir director of our ragtag group of singers.

Look out for impromptu performances throughout the downtown area starting next week - March 21-26, with our final performance at Harbourfront on the 26th (which is invitation only due to space limitations). I personally won't be at all the performances but you are sure to enjoy them nonetheless.

The Complaints Choir got started during a winter day walk of Tellervo Kalleinen and Oliver Kochta-Kalleinen in Helsinki. Perhaps it was due to the coldness of the day that they ended up discussing the possibility of transforming the huge energy people put into complaining into something else. Perhaps not directly into heat – but into something powerful anyway. 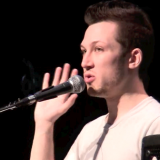 Here's a video teaser of us in rehearsal - I'm in the pink t-shirt - second row in the middle!