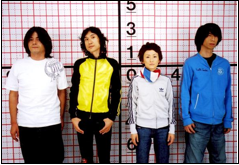 The supersonic Tokyo band somehow morphed from Stonesy punk-rock maniacs to freaky jazz-rock jammers without missing a beat, or losing a tad of their record-breaking intensity - Toronto Sun

Essentially, it's the band The Stones would be if they'd been forged in the post-punk era MTV Iggy

New York City, NY - Japanese psych-garage rock band Zoobombs are gearing up for an exciting 2011 that includes a slew of March tour dates across North America and an exclusive digital album - a band-picked collection of their favorite fuzzed out psych rock including some previously unreleased versions - entitled La Vie En Jupon.  After signing Röyksopp in 2010, MB3 Records has added Zoobombs their growing roster. La Vie En Jupon will be available March 29th.  The release will coincide with a tour that begins March 2nd in Chicago and continues through the end of the month with stops at both CMF (Canadian Music Fest) in Toronto, ON and SXSW.

The Zoobombs were formed by DON Matsuo (vocals/guitar), Matta (keyboards), and Moostop (bass) in Tokyo in September 1994 and -- together with various drummers -- have been amazing rock audiences in Japan, North America and Australia ever since. The Zoobombs' brand of rock and roll is unique: hardcore-punk blues spiked with explorations of funk, rap, prog-rock and even traditional Japanese folk.

"The first time we played together, it was a full moon -- our music style has been crazy from the start," says Matsuo. The Zoobombs incendiary live performances quickly shot them to the top of Japan's indie-rock scene and opening concert performances for The Flaming Lips and Jon Spencer's Blues Explosion.

These Japanese psych rockers have been garnering heaps of praise from major media outlets and industry personalities across the globe for their unique blend of psychedelic funk rock.  MTV Iggy posted glowing reviews of Zoobombs live show saying "Essentially, it's the band The Stones would be if they'd been forged in the post-punk era" and The New York Times featured their Let It Bomb album as a masterpiece of the "Japanese Next Wave" rock movement.

MB3 Records launched in 2010. MB3 Records is an independent record label with worldwide distribution via EMI Music and is a division of The MuseBox Inc. Other artists on MB3 Records and The MuseBox Distribution include Royksopp, Head Like A Kite, Chamberlin, White Belt Yellow Tag, Elisapie, Lights On Moscow, Jess Hill, Gavin Friday, Shortwave, Scattered Trees, Kae Sun, Paper Lions, Brute Chorus, Miles Jones, Sounds Under Radio, Living Days, My Other Friend, The Oholics, KrashKarma, and more to be announced. 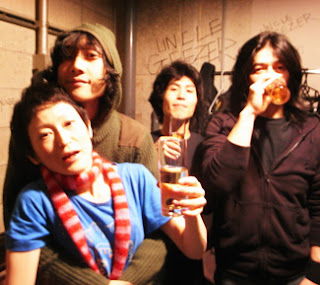