AfriCan Theatre Ensemble proudly presents
Season Of Wrath And Play: An Osofisan Spectacular, a double bill featuring
the Canadian premiere of The Engagement and Flood! by FEMI OSOFISAN

Adapted by Femi Osofisan from'The Marriage Proposal' by Anton Chekhov, The Engagement is a farce that features a marriage proposal and an engagement between a shy, hypochondriac young farmer 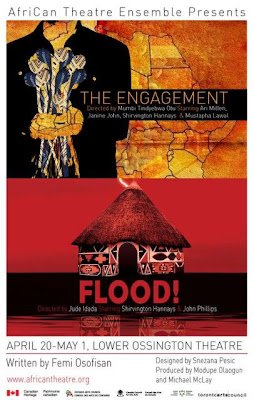 and the daughter of his neighbour. The play humorously explores our conflicts surrounding the idea of ‘ownership,’ and our tendency to compete against one another.

Directed by Mumbi Tindyebwa Otu, this Canadian premiere presents a hybrid world whose mood is set by Otu’s innovative addition, Mustapha Lawal, a musical centre in the role of 'Spirit of the House.'  Ari Millen plays the shy, hypochondriac farmer seeking a bride. Jude Idada is the father of the young woman about to be wooed. By the time the daughter, played by Janine John, gets to know about it, the proposal is all but deranged by hot arguments that have quickly taken over. The neighbours dispute each other’s claim about a coco yam farm and about their dogs. Their arguments raise important questions about how history is often relayed.

A flood has engulfed an area in contemporary Nigeria. In the few moments when rescue is still possible a father and his estranged son are deadlocked in a dispute. The son says he has come to help rescue his father but behind the son’s gesture the father suspects a more sinister motive.

Ignoring the signs and sounds of the impending doom, the father instead follows his instincts. The son admits that he has come to retrieve his deceased mother’s gold. According to him, he has to 'play the game according to the rules of the age.' To the father, the flood from the river overflowing her banks is the goddess’s effort to reassert a moral universe. The son says that the language of the gods and goddesses is out of touch with modern life... Is there enough time to save father and son?

Directed by Jude Idada and Awoba Bob-Manuel, Flood!  is a gripping drama which features John Phillips as an earnest father who wants to protect an ancient tradition from the contemporary beliefs of his son, played by Chisom Darlington. A battle ensues in the face of a ravaging flood. Will time run out on them?

About the playwright:
Born in 1946, FEMI OSOFISAN enjoys a reputation as the most regularly performed playwright in Nigeria. Professor of Drama since 1985 at the University of Ibadan where he has spent most of his adult 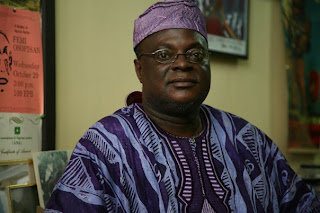 career, he was until fairly recently the General Manager and Chief Executive of the National Theatre, Lagos. In addition to his work in the theatre—where he is to be found playing diverse roles as actor, director, song writer, composer and company leader.

Osofisan, aka Okinba Launko is also an outstanding poet, translator, critic and theorist of literature, and features as one of the regular columnists in Nigeria’s leading newspapers. Osofisan has written over fifty plays, which have been performed in various parts of the world, and some of which were commissioned by theatres in Europe and America. He is a Fellow of Interweaving Performance Cultures, International Research Center, Freie Universität Berlin, Germany (2009).

AfriCan Theatre Ensemble recognizes the power of live art to inspire and renew the human spirit  and to forge human relationships across cultures, creeds, ethnicities, ideologies, genders, and social classes.

To that end, our work presents the different theatrical idioms, traditions and experiences of Africa and in so doing creates an avenue for cultural exchange between Africa and Canada.