EnRoute Film Festival Call for Entries - Open to May 31

on April 24, 2011
From a media release - I checked it out last year and was amazed at the talent on display - and so will you this summer if you fly Air Canada: 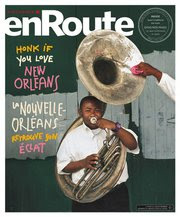 • Submissions will be accepted until Tuesday, May 31.

Selected films will be broadcast on Air Canada’s personal seatback entertainment system on the Canadian Movies channel viewed by millions of Air Canada customers around the world. A free public screening and awards celebration will be held in Toronto at the end of the year to honour the winners.