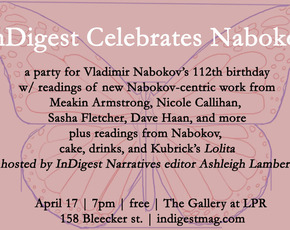 On April 17th InDigest will celebrate the 112th birthday of visionary novelist/short-story writer/literary critic/lepidopterist/chess genius/synesthete Vladimir Nabokov with a party/reading at (Le) Poisson Rouge. The event will feature novelists, poets, and scholars reading works on and inspired by the work of Nabokov. Author Meakin Armstrong will read a new work about visiting the author's home, poet Sasha Fletcher (pictured left) will read new poems inspired by the work of Nabokov, scholars will discuss his recently verified theories on butterflies, there will be cake, 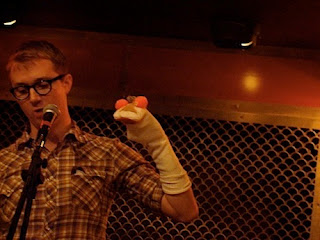 Kubrick's Lolita (which Nabokov wrote the screenplay for himself) will play on the TVs and everyone will have a damn good time.