on April 25, 2011
From a media release. Formerly known as Tabla Ecstacy, newly named Talavya is touring the US this spring, including a date in NYC:

The tabla evokes and invokes. It can playfully mimic a cricket bowler's moves or capture the sensual arc of deer's leap. Now a familiar sound in the West thanks to lightning-fast masters like Zakir Hussain and 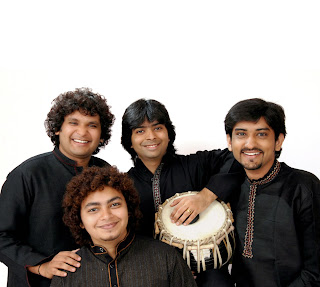 innovators like Talvin Singh, the essential Indian classical instrument was traditionally on the sidelines, its emotional power harnessed to support other performers.

No longer. Tabla comes center stage in the hands of the young, highly trained players of Talavya , a quartet that revels in the tabla's hidden potency as a rhythmic and melodic instrument capable of expressing just about anything. Touring North America in spring 2011, the ensemble, formerly known as Tabla Ecstasy, distills the age-old spirit and practice of tabla into a high-energy, highly accessible evening that reveals the instrument's true joys.

The ensemble will be joined by accomplished Kathak (North Indian classical) dancer Jin (JoungJin) Won, who is also a tabla player, storyteller, and teacher, for several performances, reflecting the deep unity of music and movement in Indian tradition.

"Our only goal is to present Indian classical arts in a contemporary language that can be enjoyed by more people," explains Rushi Vakil, performer and group leader. "The language of tabla is really graceful, full of different tempos, energies, and emotions. All the shades of music can be found in it."

Talavya is the brainchild of Pandit Divyang Vakil, a tabla maestro and master teacher who gave up a successful performance career to dedicate himself to guiding students and composing music. The son of a philosopher and a Montessori-influenced teacher, Vakil, affectionately and respectfully known as "Guruji," began playing tabla at age three and takes an unorthodox approach to his tradition and his teaching. In an unusual move, he studied with masters from gharana, or lineages, drawing on each in shaping his own direction.

This direction focuses on the demanding technical aspects of Indian classical performance-the precision required to evoke nuanced moods and ideas. To get to the requisite level, the group rehearses constantly, learning to feel each other's phrasing within the precise rhythmic cycle of the classical tradition. In the world of Indian classical music, there's no such thing as practicing too much.

As Guruji's compositions blossomed, he and his students realized they needed to bring their tabla performance approaches under one name, Talavya. The ancient Sanskrit word embraces both the rhythmic cycle ( taal) and pulse or tempo (laya) vital to Indian classical music and dance. 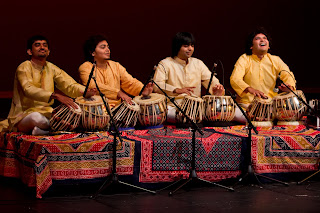 Though tabla ensembles are a relatively new development, Talavya applies the same rigor to their performance as they would to a classical piece, insisting on split-second perfection and pitch-perfect tuning of their drums. Though they can play with the spark and passion of a rock drum solo, the accompanying harmonium and their honed rhythmic sense keeps their playing grounded in the cycle of beats their forbearers played in for millennia.

Yet within this technical excellence, Guruji also encourages each student to find a distinctive voice. This touch means the performers of Talavya let their personalities shine in concert. Mop-topped Sahil Patel rarely stops smiling and looks for the lighter side of the music, while the young Rahul Shrimali takes things more seriously. Rushi Vakil, Guruji's son as well as his student, loves jazz, is a keyboardist and world music composer, while Kaumil Shah teaches djembe (and loves transferring Indian classical rhythms to the African drum). These broader horizons and varied influences keep the group's perspective fresh and open to other musical possibilities.

Dancer Jin exemplifies this diversity. Korean-born, she came to India 15 years ago from a career in the theater, intrigued by the rigor of the Indian approach to expressive movement. After studying English for several months, she traveled the country. Jin fell in love with Kathak, the highly percussive classical form that emerged as dance-based storytelling which moved from Hindu temples to the Persian-influenced Muslim

courts of the Moghuls.

Kathak is not only based on storytelling, but also rhythm as the dancer complements and competes with the rhythm created by the accompanying tabla player.  Not content with the basic understanding of rhythm and tabla imparted to dancers, Jin instead devoted herself to intensive engagement with the instrument, under Guruji's guidance, making her a rare performer (few women play tabla, and few tabla players dance Kathak). Her dedication and skill have won her the admiration of classical choreographers and Indian audiences. (Jin eventually wrote a textbook on tabla).

The intensity and generosity of Talavya and Jin keep to the spirit of Indian classical art, which is about devotion and not entertainment, while expanding its palette and its audience. Each performance moves between rousing peaks and slower, smooth meditative passages not usually associated with percussion. It engages the pure sonic energy of Indian traditions, the narrative possibilities of drums and dance, and the wide-open spaces for improvisation, creativity, and personal expression Indian arts offer.

It's not uncommon to catch audience members-from teenage hipsters to cosmopolitan professionals-bopping along to the pulse, or in tears or in awe after the hour-and-a-half-long journey through different tempos and timbres.

"People don't expect the feelings involved, perhaps because they don't think rhythm can do the same things emotionally as melody," explains accompanying artist Heena Patel. "As Guruji tells us, you smooth out the edges and perfect the contours, otherwise it's just drumming. You have to make music out of the instruments." 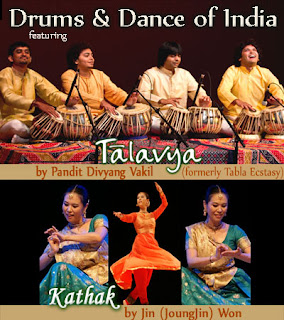 "Jin is a true ambassador for Indian arts. She has finesse, grace and a thorough understanding of her art. It's incredible to see a Korean woman truly make Indian culture her own."
Dr. Subhash Bhrambhatt
President, All India College Principles Association