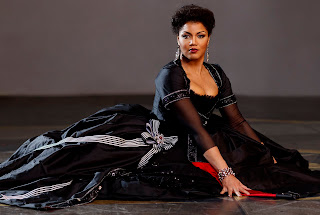 This thrilling story of desperate intrigues, unrequited love and heart stopping reversals of fortune is taken directly from Roman history.  Roman aristocrat Vitellia plots the assassination of Tito, Emperor of Rome.  When the plot ultimately fails, Tito’s forgiveness of his enemies catches all off guard, turning the opera’s theme into one of clemency and redemption.  In Mozart’s lifetime, La Clemenza di Tito enjoyed enormous success in Vienna, Prague, Berlin, Naples, St. Petersburg, Paris and London.

Soprano Measha Brueggergosman sings the role of the fiercely determined Vitellia.  More than 3 billion people witnessed her epic performance at the Opening Ceremonies of the 2010 Olympic Games which cemented her international standing as a fresh and dynamic ambassador for classical music.  She has garnered world-wide acclaim as much for her innate musicianship and voluptuous voice as for her incomparable stage presence.  Ms Brueggergosman’s second solo recording, Night and Dreams

, was recently nominated for a Juno award.

Croatian tenor Krešimir Špicer appears as Tito, a role he has previously sung to acclaim in Amsterdam, Aix-en-Provence and Luxembourg.  Other recent highlights include Arturo in Lucia di Lammermoor in Los Angeles, Ulisse in Berlin and the title role in Oedipus Rex with Opera du Rhin.

Canadian soprano Mireille Asselin who starred as Galatea in OA’s fall production of Acis and Galatea sings the role of Servilia, Sesto’s sister.   Servilia is in love with her brother’s friend, Annio, a trouser role sung by mezzo-soprano Mireille Lebel.  Bass-baritone Curtis Sullivan, who celebrates 25 years performing with Opera Atelier, appears as Publio, Commander of the Praetorian Guard.   The production also showcases the company’s full corps of Artists of Atelier Ballet.

• Tickets for La Clemenza di Tito are $33 to $166
• Can be purchased by calling TicketMaster at 416-872-5555
• On-line at www.ticketmaster.ca
• Or at the Elgin Theatre box office.
• Operatix are $20 and may be purchased by people under age of 30 in person at the Elgin Theatre Box Office (subject to availability) or purchased on line with the code OPERATIX.
• Valid I.D. is required to pick up Operatix tickets.
• Group discounts (15 people +) are available by calling 416.703.3767 ext. 22.
• For more information visit www.operaatelier.com .