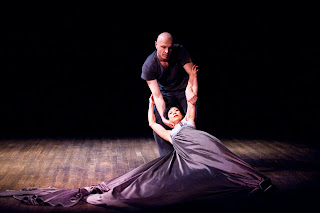 "Robert Glumbek and Yvonne Ng are the John Lennon and Yoko Ono of dance. Physically mismatched, they become the marriage of true minds on a stage." - Susan Walker, Toronto Star

Mixed Repertoire marks tiger princess dance projects' third duet program featuring Ng and Glumbek, who NOW Magazine's Glenn Sumi called, "The yin and yang of the dance stage," claiming that they "were born to dance together." In a review for Classical 96.3 FM, dance critic Paula Citron called Ng and Glumbek's 2004 show, Fading Shadows/Returning Echoes, "a heady mix of themes and movement that beautifully shows off these classy and talented dancers."

• Originally performed in 2004, Robert Glumbek's A Tale Begun is an extraordinary piece created specifically for himself and the petite Ng, strapped to his back, that examines the desire to be nurturing and the need to maintain independence. Glumbek has re-conceived the piece for this presentation.
• Yvonne Ng performs STICKS, a new solo choreographed for her by Tedd Robinson set in an 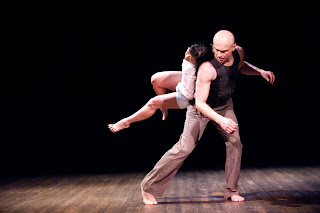 otherworldly forest. STICKS is a series of portraits that move. A woman; a turmeric-coloured dress; a length of canvas; some sticks; a journey.  We do not know where she has come from, or where she is going - it is this moment in the journey that is the crux.
• Ng and Glumbek perform level on my Level, a lively athletic duet choreographed by Kevin O'Day that capitalizes on the performers' extreme physical differences and captures their distinct connection.
• Robert Glumbek premieres an, as yet, untitled semi-autobiographical solo, created by himself in collaboration with Roberto Campanella, Kevin O'Day, Luches Huddleston Jr. and Yvonne Ng.

In 1987, Robert Glumbek left Poland for Canada where he danced for 10 years with Desrosiers Dance Theatre in Toronto. Glumbek is currently Associate Artistic Director of ProArteDanza founded by Artistic Director Roberto Campanella. Glumbek's recent works include commissions for Ryerson University, the Mannheim Ballet, princess productions and ProArteDanza. In the 8th International Solo-Dance Festival in Stuttgart, he was entered as a finalist for his solo, Subsistence. He and Campanella were finalists at the 17th Internationaler Wettbewerb für Choreographen in Hannover for their quartet, Nothing Twice. They again collaborated in the creation of Nine Sentiments, titled after, and inspired by, Michael Ondaatje's poem. In the fall of 2011, Glumbek will create a new work for Ballet B.C. 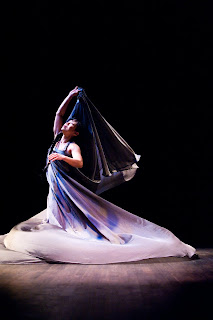 Yvonne Ng is a dancer, choreographer, arts educator, producer, and artistic director of tiger princess dance projects, founded by Ng in 1995 under the umbrella of princess productions. tiger princess dance projects creates works that reflect Ng's uniquely Canadian experience as an immigrant and visible minority person, presenting them in Canada and abroad (Australia, Ireland and Singapore). Ng received a Dora Mavor Moore Award in 2000 and has been nominated eight times. Ng is also the Artistic Director of Series 8:08 (since 1994) and the curator and presenter of dance: made in canada/fait au canada, both of which produce the work of choreographers from across Canada.

Kevin O'Day received his early dance training at the Joffrey Ballet School in New York, and joined the main company soon after. In 1984, O'Day began his long association with choreographer Twyla Tharp. From 1988 to 1991, he danced with American Ballet Theatre and William Forsythe's Frankfurt Ballet; from 1992 until 1995, he was a member of Mikhail Baryshnikov's White Oak Dance Project where he made his choreographic debut while guesting frequently with the New York City Ballet. He formed his own company, O'Day Dances, in 1998 with composer John King. He is currently artistic director of Kevin O'Day-Ballet Mannheim in Germany. In 2009, he choreographed his 50th ballet and first full-length narrative ballet, Hamlet, for the Stuttgart Ballet.

Tedd Robinson rose to prominence as Artistic Director of Contemporary Dancers in Winnipeg, Canada (1984 to 1990). He is now firmly established as a choreographer, educator and solo artist whose critically acclaimed works have won him a multitude of commissions and an international schedule of touring and teaching, as well as a Chalmers National Dance Award in 1998. His work is influenced by his six years of study as a monk in the Hakukaze soto zen monastery in Ottawa. 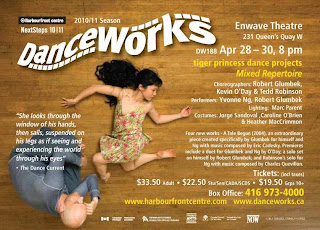 All images by Dean Buscher