The music of Club d'Elf flies through North African trance, glitchy turntablism, improvisation, and rock psychedelia, but it's playfully altered states of musical consciousness that truly guide the band. Witness 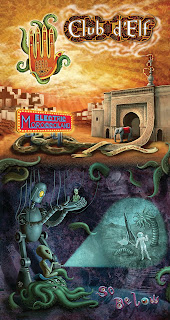 founder Mike Rivard's first night in Morocco, the country that had fired his musical imagination for more than a decade: In a strikingly vivid dream, he felt himself swimming upwards in the air as fantastic landscapes, mountains, and tiled buildings stretched out beneath him.

The band-a rotating group of players drawn from a pool that includes keyboardist John Medeski, DJ Logic, David Bowie's guitarists or any number of Moroccan musical icons-swims in the same dreamlike atmosphere, both live-Club d'Elf tours New England this April-and on their new double album Electric Moroccoland / So Below (Face Pelt; April 5, 2011).

Club d'Elf grabs the elusive subtleties of North African rhythms and puts them through their edgy paces on Electric Moroccoland, the first disc of their new two-CD set.  Here, the group is influenced by Morocco's rich musical heritage and Rivard's dedication to the three-stringed, camel-skinned, bass-like sintir. On the second disc, So Below , Rivard and company de- and reconstruct musical forms from funk and dub to jazz, creating an anything-goes exploration that holds true to the spirit of trance and the affinity that connects Club D'Elf's diverse players and their varying styles.

"The crux of Moroccan music is trance," Rivard explains. "Trance as a quality in music has always attracted me, whether it's an extended James Brown cut, or something by Fela or Steve Reich. I've always sought out music that allows you to forget where and who you are and to break out of the mind's constant chatter."

Rivard's fascination with Moroccan, and specifically Gnawan music, began thanks to a fellow traveler in trance, the late Mark Sandman of the legendary indie rock band Morphine. One night, Sandman threw on a CD by Hassan Hakmoun, Gnawa musician extraordinaire. After begging to borrow the album, Rivard went home and listened to it over and over again. "I never returned it, and that was something that Mark always grumbled about," Rivard laughs. "I played it constantly, and it became the soundtrack for my life. That's when I dedicated myself to playing sintir."

The three-stringed deep-voiced instrument forms the foundation of ceremonies among the Gnawa, whose ancestors came as slaves from sub-Saharan Africa 500 years ago. Their music blends animism and Sufism in rituals designed to induce trance, to contact spirits, and to heal. Rivard began learning to play the instrument on his own, practicing long hours with recordings and trying out rock riffs to see what worked. He also began taking cues from Moroccan musician friends like oud (Arabic lute) player and percussionist Brahim Fribgane, who introduced him to Moroccan émigrés in the Boston area, a community of expats who provided encouragement and inspiration for Rivard during late-night hangs in the basement of a Moroccan store. 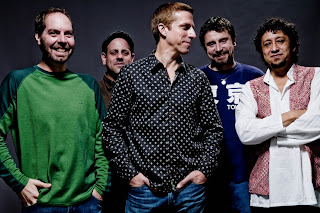 Eventually, Rivard's fascination with the instrument led him to the Moroccan coastal city of Essaouira, where he spent time in the home of one of the great Gnawan malaams (a master of ceremonies and master musician). It was there that he began to grasp just how intense and complex sintir technique could be. "It's amazing what you can do on an instrument with only three strings and a one-octave range. But in the hands of someone like Malaam Mahmoud Guinea, the sintir has infinite possibilities that go beyond the physical act of playing. He uses the instrument as a device to connect with the spirit world. It's both powerful and humbling."

Rivard uncovered a whole soundscape of subtleties as he became more and more deeply attuned to Moroccan music. One challenge came as Rivard tried to unpack the rhythmic pattern of the chaabi, a beat in 12/8 with a mysteriously elusive "one." "Brahim and I used to take long car trips together and listen to North African cassettes," Rivard recalls. "I'd clap along with him, but then I'd move to the wrong beat and he'd shake his head no. I had to train myself to hear the 'one' in the right spot, to really feel how the upbeats and accents worked. Once I got it, it felt like I was initiated into a secret society."

These details add a richness and depth to Club D'Elf's music and bring Moroccan sensibilities into unlikely places. Rivard wanted to do a tribute to Sandman, who passed away in 1999, so he and Club D'Elf covered Morphine's "Rope on Fire"-adding a chaabi beat, electric oud, and a sinuous bass line, propelling Sandman's hypnotic tune.

Unlikely Moroccan influences struck again when Rivard was improvising at a remote Maine cabin, and a riff from Cream's "Sunshine of Your Love" kept sneaking into his sintir line. The song also fit the chaabi, and while it worked as an instrumental, Rivard dreamed of adding vocals. He had a Berber scholar friend translate the lyrics and got friend and frequent Club D'Elf contributor Hassan Hakmoun to sing them. Rivard explains, "Hassan really got into it and added his own extemporaneous touches while Medeski rocked the mellotron," an analogue keyboard big with prog rock bands like King Crimson and Yes.

What brings all the disparate, dynamic elements together is the magnetism of trance, a power that cuts across cultures. Along with musical mixtures, Rivard has drawn on diverse approaches to trance, and was as inspired by the thoughts of psychedelic explorer Terence McKenna (whose voice is woven into "Trance Meeting") in both shaping Club d'Elf and naming the band (McKenna communed with "elf-like entities" on some of his travels).

For tracks like "As Above," he brought together master Ghanaian drummer Dolsi-naa Abubakari Lunna with DJ Logic, creating a fusion of ancient rhythms with modern turntablism, enhanced with a rousing piano part by John Medeski, played on a battered upright in his Brooklyn studio. On "So Below," Rivard took some of Sandman's last recordings and carved out a trancey core from layer upon layer of takes, tracks, and musical input from a dozen musicians.

The results, like the band's live performances, draw listeners in through repetition, atmospherics, and a solid rhythm section meant to fill the dance floor. The songs also hint at the power of trance to do more than just mesmerize the listener, but also to transcend barriers. Much of the new Club d'Elf music developed during rehearsals at drummer Erik Kerr's Christian church, where Brahim would break into rousing praise of Allah. Yet no one batted an eye.

"Our music is about surrender and giving in to something more powerful than one's self, and as corny as it sounds, really feeling love for your brothers," reflects Rivard. "It amazed me at how open Erik could be to a different faith, and likewise for Brahim. Certainly life is a lot more complicated than the simple ways of us musicians, but if our little musical brotherhood can embrace different beliefs and cultures, then maybe it's possible for such cooperation to exist in society at large."