on April 29, 2011
The NFB at HotDocs: Mighty Jerome
a film by Charles Officer

I have to confess that I had never heard of Harry Jerome before watching this documentary, even though he'd held world records in sprinting in the early 1960's. This film uses a blend of interviews with friends and fellow runners, old sports journalists and family members, including Harry's mother, along with the 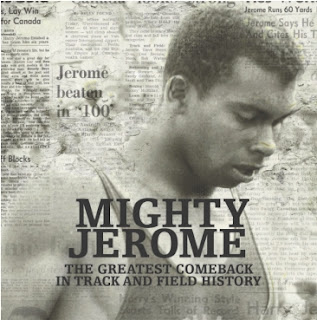 odd reenactment and of course the newsreels of Harry himself, lightning fast and determined on the track.

Some stock footage rounds out the portrait of his time period, when the Civil Rights Movement upheaved the status quo in the United States - and Canadians tut-tutted the American excesses even as they politely perpetuated the status quo here. That was the environment Harry grew up in during a childhood in Saskatchewan - one of only three black kids at the high school, (his sister Val being one of the others).

He left the province to train in North Vancouver, as now a posh neighbourhood where his family found resistance. There were petitions circulated in an effort to try and force "the undesirables" to leave.

In person, Harry was quite reserved, but on the track he shone. At the time, the Vancouver International Track Meet drew crowds of 15,000 to 23,000 people, and elite athletes of any kind or race were very few and far between in Canada. He quickly became a media sensation, but as one of his old friends put it, "The world wasn't ready for Harry, and Harry wasn't ready for the world."

After breaking the world record for 100 yards (and he was actually the only person to hold both the 100 yard and 100 metre records) he was touted as this country's gold medal hopeful for the games in Rome in 1960. When he pulled a leg muscle and couldn't finish the final heat, the media wasn't kind. They labeled him 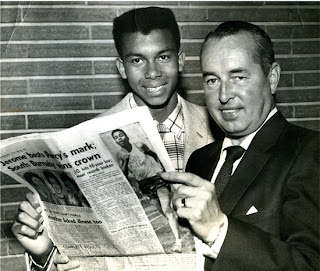 rude, a complainer and quitter.

Reel to reel tapes and black and white TV interviews let us see the careful and reserved Harry walking the tightrope, ever conscious of his inflated role as a lightning rod for opinion. It was easy for white runner and friend Bruce Kidd - as he acknowledges now - to talk about and support the Civil Rights Movement and its more aggressive strategies on camera, not so easy for a black man who wanted to remain an Olympian.

After another injury at the Commonwealth Games in 1962, they were even more vicious in their criticism, even though the injury (a ruptured quadriceps tendon) was later verified and operated on. Everyone assumed that his career was over at that point, with his leg, once healed, a thin ghost of its running form, but with an iron will he proved them wrong and went on to win bronze at the Tokyo Olympics in 1964, and then a gold medal at the Commonwealth Games in Jamaica in 1966.

Despite his rocky relationship with the media, his career ended on a high note, and an Order of Canada award in 1970, among other honours. Today his name graces track events and the Harry Jerome Awards given by the Black Business and Professional Association. Sadly Harry died of a seizure at the age of 42. This film represents a wider exposure and recognition that's long overdue.