Off-Broadway - Growing Up Gonzales in Previews from April 17

Lessons from my bewildered, maladjusted youth!

A hilarious new uncensored, unrated, unabashed, unchained One Man Comedy about growing up. It's 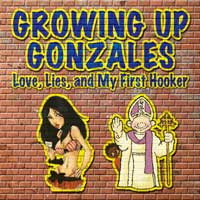 Freddie Prinze meets Richard Pryor in this honest, fast paced, spicey hot, innocent yet edgy recollection of life in the 70's, in The Bronx. 40 something year old Cisco Gonzales takes us on a guided tour of The Family, Little League, The Church, Birth, The Brothel and much, much more..

A young innocent boy raised by wolves (actually big brothers) grows up and shares stories about his bewildered, maladjusted, disconnected, misguided, penis focused youth in "Growing Up Gonzales: love, lies and my first hooker." After generations of secrecy, the truth about "Machismo" is finally revealed, the "Secret Ritual Beatdown" at the Latino Funeral is finally exposed and borderline psychotic childhood lessons are finally dissected.