Reggae Release: Dub is a Weapon in NYC April 16 with New CD

Ride the Faders:
Dub Is A Weapon Make Psychedelic Studio Sounds Breathe Fire on Vaporized and on Tour, April 2011

“It can’t be done, man!” That’s what Dave Hahn, mastermind behind Dub Is A Weapon, heard when he first floated the idea of a live dub group, as he and his mates listened to some prime 1960s King Tubby

cuts in the band van. “Everyone seemed to think you could only do dub in the studio,” Hahn recalls. 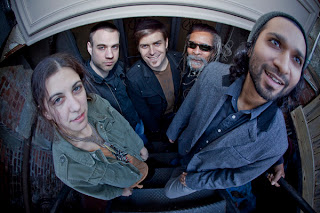 Hahn set out to prove them wrong, with skills learned live and on the road, and with help from a Jamaican beatnik percussionist, an old high school friend, and young upstarts from the Brooklyn scene. Together they’ve honed their live take on the genre’s spaced-out grooves, a sound felt in full force on Vaporized (Harmonized Records; April 26, 2011

) and on stage on their March/April tour.

Hahn had been kicking around the New York music scene for a while. He’d played ska with The Slackers and the Stubborn All-Stars, and Afrobeat with Antibalas. He worked as a dub engineer for the Easy Star All-Star’s Dub Side of the Moon tour. But he wanted to make a dub record of his own: The music had the modal appeal of Coltrane, but was built for the dance floor.

“Dub hooked me in,” explains Hahn. “It really reminded me of modal jazz with its static harmony, which gives musicians lots of freedom to explore and encourages listeners to contemplate what musicians are thinking about. At the same time, dub and reggae are dance music, even if you have that same meditative quality.”

This perfect mix of pensive and driving rolls through Dub Is A Weapon’s music. Hahn finds dub inspiration everywhere: in the complex interlocking grooves he mastered with Antibalas, the intense snowfall on Hokkaido, or in a simple melody plunked out on a piano. He crafts a bass line, then builds from there. The vibe is trippy, but with a fire and edge that give Dub Is A Weapon’s music real punch. This is music for serious dance floor moves, not spacey evenings on the couch.

Witness the funky polyrhythm of tracks like “Turbulence,” with its dubbed-out, 3-against-4 beat and Ethiopian-inspired waves of brass. Or “Turmoil,” with its dueling bass lines, shifting sections, and blissed-out solos. Hahn saw “Forwarding Home,” featuring vocals by Rob Symeon as a round, swirling around rich modal melodies and guitar licks that flirt with both major and minor moments. Through it all, a powerful stream of dreamy, gritty effects flows in and out.

Figuring out how to make psychedelic studio sounds burn up the dance floor took years of experimentation, of trying things on the fly in illegal Brooklyn loft nightclubs or on tour as Lee “Scratch” Perry’s backing band. Eventually, Hahn got it: He wasn’t leading a band, he was riding the faders.

“At first I really struggled with getting the band to create dub that felt as powerful as what I could create in the studio. I finally figured out I had to think of each musician as a fader on the mixing board, cuing them to drop out and come back in so I could replicate the dub mix I had in mind.” 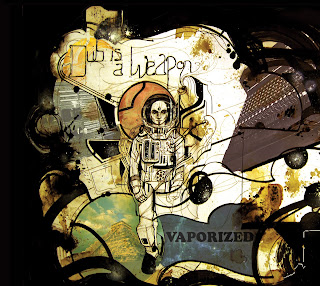 To make dub happen live, Hahn worked with a shifting group of friends, including bassist Dan Jeselsohn from the New York’s Mephiskapheles

to jam and record with him at his Greenpoint, Brooklyn studio. Soon a multigenerational core of strong musicians emerged.

These included percussionist Larry McDonald, who had played on several crucial Bob Marley cuts in Jamaica and had since backed up American icons from Taj Mahal to Gil-Scott Heron to Bad Brains—moves that earned him the sometime nickname of “Original Beatnik.”

Ben Rogerson, equally at home on the bass or guitar, was a friend of Hahn’s since high school when they played in the jazz band together. Drummer Madhu Siddappa and Hahn met at a mysterious rehearsal session with Lauryn Hill, who came in, tried some songs, and wandered out. Sax ingénue Maria Eisen joined the group straight out of college.

Vaporized captures the group’s diverse energy in a way that mirrors their live shows. The band played and did the dub effects live, with next to no overdubs or post-take tweaking, at a studio run by a friend, the sound engineer for reggae band John Brown’s Body. “It’s like a jazz record from 1950s,” notes Hahn. “We did a couple takes of each song, then picked the one that sounded best. We laid the stuff down and made it happen.” 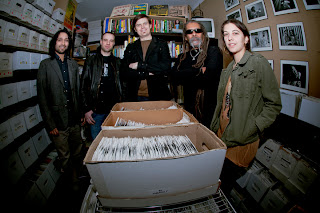 “It’s like hearing us live,” he continues, “when you can feel all the drama of dub as parts come in and out. That’s what’s exciting about our music: We never play things the same way twice.”