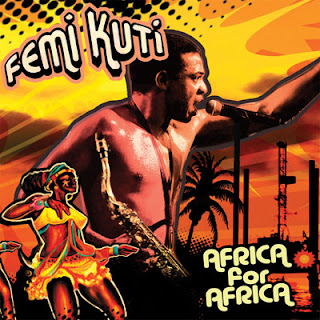 • He's in Montreal tonight and then the tour hits the U.S. with stops from New York to New Orleans - check the link for details & tickets

Femi Kuti is a positive force all on his own, and a force to be reckoned with both on stage and off as a voice for the people of Nigeria.When he took the stage last night it was to a packed crowd's appreciative screams and he and the group turned in a solid show of just under two hours of great music that had that same crowd jiggling on the dance floor throughout the performance.

Of course he wasn't alone on stage, accompanied by The Positive Force - a drummer, a percussionist, 5 piece horn section, bass, guitar and three absolutely incredibly indefatigable ladies who weren't still the entire night. There's an intensity in his own performance - a sense of conviction - that's almost palpable.

His latest release, Africa for Africa

, comes with a message about empowerment and the unification of Africans in their struggle for their rightful recognition in the world, continuing his longstanding legacy as an outspoken political commentator - a legacy never more timely than now, when violence has greeted the lastest elections in his native country.

If you're new to his music or show you're in for an mind blowing treat. If not, his powerful message wrapped up in the powerhouse of Afrobeat will come as no surprise. He's got to be one of the hardest working musicians on the planet - and a spectacular sax player too btw - with very little filler between songs, just a solid couple of hours of music. He's very accessible to fans too, glad handing it with the throngs in the front row who clamoured for his attention.

Catch them if you can!