Skateboarding on Film: Cameron Bohannon's Product of the Bay

on April 12, 2011
Bumping up against San Francisco skateboarders on the streets of Harlem... 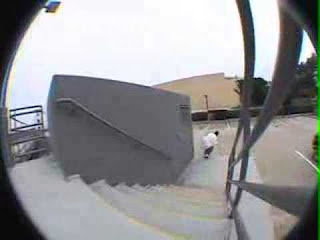 So I'm walking down 125th Street minding my own business - and if you've ever walked down 125th anywhere from Adam Clayton Powell to Lexington, you'll know that minding your own business is pretty much impossible - when Mike Wright persuades me to buy this DVD. (It was either that or jewellery, and as a serious jewellery addict, I know when to keep my distance.)

Product of the Bay ends up being a very cool documentary about skateboarders in San Francisco, shot with the kind of creativity on a budget that a true indie filmmaker can muster. There are some artsy graphics, and both aerial and street shots of the city that emerges as one of the characters in the film, with its up and down streets, seemingly endless stretches of concrete and unfailingly blue skies.

There are non-skateboarding interludes - snippets of phone calls, news and other TV flotsam and jetsam, partying scenes and so on - but the bulk of it and the real show is a parade of skateboarders doing what they do best. These guys are pretty impressive, and I'll have to give kudos for the single best move (in my humble estimation) to my new acquaintance Mike Wright and a series of gravity defying feats.

The shots are enhanced with some interesting camera work, including fish eye lens, slightly over exposed night scenes, and a bottom-up perspective that really works to keep you focused on the action and how it's accomplished. The visual variety works to add interest to the constant flow of boarders weaving their way in and out of San Fran's streets.

It's a fascinating portrait of a scene where the only reward is revelling in the freedom and sharing the ultimate coolness of it all with your brothers. I totally get it.