New York, NY - When it rains it pours, as the old saying goes. Days after Austin-based rock act Sounds Under Radio was selected to have their single “Sing” from their forthcoming album ‘Where My 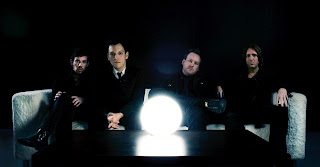 ’ (in stores May 3rd) featured on Fox’s American Idol, their music video for the single is also premiered on PopMatters.

Sounds Under Radio are infiltrating your television airwaves, as “Sing” was selected to be used in the newest promo spots and commercials for American Idol. After a spate of sync successes in film and TV with placements in Spider Man 3 (Sony Pictures), The Wolfman (Universal Pictures), War Games: The Dead Code (MGM Pictures) and CW's 'The Vampire Diaries', Sounds Under Radio now manage to share their music with people on one of the grandest scales of broadcast television, with their American Idol spot.

Directed by Jeff Ray at Papertank Productions, Sounds Under Radio's music video, "Sing," is as visually epic as it is musically stunning. The music video is a way of showing that despite disasters and fears in the world, there is still beauty all around us.