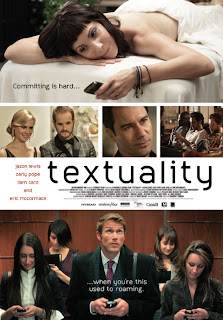 Toronto, ON – Remember the Zack Morris cell phone? It looked like a giant brick, and could only make and receive calls; no texts, no BBMs, no email. Technology has changed the way we work, read, manage money – it’s even changed the way we date. Textuality, a Canadian feature film produced by Strident Films, explores the paradox of today's 20- and 30-somethings who find it easier to be digitally connected to everyone than to feel emotionally connected with anyone.

Starring Jason Lewis (Sex and the City), Carly Pope (Young People Fucking), and Eric McCormack (Will and Grace), Textuality is a light-hearted story about modern day relationships – the frustration and humour that arises from them, and the technology that enables them. It follows two people, Breslin (Lewis) and Simone (Pope), who are trying to begin a relationship with each other, but who must first escape the multiple relationships they were managing through their Blackberrys before they met. At its heart, the film is a story about living, loving, and most importantly, laughing at ourselves in this crazy digital age.

“While it feels like we've been texting and using smartphone apps forever, most of these things really hit the mainstream only three to five years ago,” said producer Marc Rigaux. “With social media at the forefront of communicating, I think the inspiration for the story is all around us; it’s in the conversations we have with our friends about their dating woes, the person we just checked out on Facebook, the story we just read about Tiger Woods, and the conversations we have at every dinner party (when we’re not texting in front of each other).” 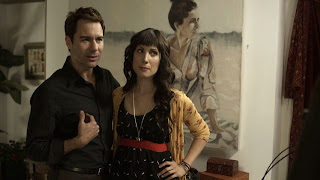 About Strident Films:
Strident Films is an independent production house focused on the acquisition, development, production and distribution of high quality films for the domestic and international marketplace. The company produces entertaining and thought-provoking projects that appeal to a wide range of audiences through both traditional and newly emerging distribution channels. Strident Films is based in Toronto, Ontario.