COMICS FROM ACROSS CANADA COMPETE FOR A CHANCE TO WIN $25,000 AND A SHOT AT COMIC STARDOM

TORONTO, ON April 21, 2011 – Some of Canada’s funniest people (or those that think they are the funniest) will descend on Toronto tomorrow for the next week to compete for a $25,000 cash prize and a chance at comic stardom. One talented comic could help subsidize his late night lifestyle and laugh all the way to the bank.

Producers from some of the top comedy television shows such as Chelsea Lately, the Conan O’Brien Show and from the Just For Laughs Festival will be judging which comedian is Canada’s funniest at the six annual Yuk Yuk’s Great Canadian Laugh Off.  This year’s event runs from April 22 to May 1, 2011, and it is the first time that the competition is open only to Canadians who have the gift of the guffaw.  Each has a chance for national television exposure at the finals.  The final competition will be taped for a comedy special on Sunday, May 1 for CTV’s Comedy Network.

Starting on Friday, April 22, 64 comedians will come to Toronto to compete on the big stage. 51 performers were selected by random computer draw, while the remaining 13 are winners from local Laugh Off competitions held at Yuk Yuk’s comedy clubs from coast to coast.  Contestants will perform daily, with two winners being selected from each show to compete in the semifinals on Fri April 29 and 30th where the final 8 comics will be selected. These comics will swap fists of funny and lashes of laughter, slugging it out for the CDN $25,000 grand prize.

Whether a working comic is hoping for a bail out or just wants to bid farewell to the sidewalks of Toronto - anyone has a chance to win from amateurs to professionals.  Stars who got their start at Yuk Yuk’s include:  Jim Carrey, Mike Moranis, Russell Peters and Norm MacDonald just to name a few. 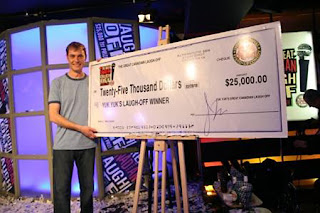 Yuk Yuk’s Great Canadian Laugh Off is Canada’s biggest open comedy  competition, with Canada’s largest comedy prize.  There are two categories for contestants to enter.  Previous winners have received their own Comedy Now specials, thanks in part to the exposure they received from the Laugh Off. (Tom Dustin of Detroit, last year's winner, is pictured left.)

This year’s Great Canadian Laugh Off is sponsored by Via Rail Canada, Metro News, Town Inn and Suites and The Comedy Network.