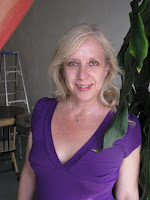 blogger was down, I was already working too much and running just a couple of days ahead... with the result that the next several posts will be a little late but will still be of interest.