The Stealth Clave:
Roots Pianist Neil Pearlman Wakes Up the Latin and Funk in Traditional Scottish Tunes on Coffee and the Mojo Hat

"There's a clave hidden in Scottish music, if you look for it," explains piano player, arranger, and composer Neil Pearlman. It's a secret place where Robert Burns does the boogie woogie. And where salsa brass and Tower of Power bass sneak into the frenetic triplets of island dances. 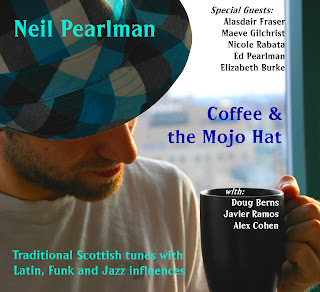 The possibilities of the piano-Pearlman's chosen instrument since he was four-were limited by what Pearlman humorously calls "the boom-chuck" style of most accompaniment for traditional tunes. But not on Cape Breton, Canada's Celtic roots hotspot, with its thriving music scene and a piano style all its own.

Inspired by stride and boogie woogie, Cape Breton piano players held their own with the region's acclaimed fiddlers at community dances. They broke out the broken octaves, freeing the right hand to hit all the burls-the traditional, fast-paced triplets-that make Scottish tunes sparkle. Pearlman fell in love with the approach, which he taught himself in his early teens by watching Cape Breton performers.

"The base of Cape Breton piano is the left hand, which was heavily influenced by boogie woogie and keeps a constant pulse," Pearlman says. "It condenses the usual two-handed back-and-forth and opens up right hand to do syncopations. It's a totally different world from the basic piano style you often hear in a contra dance or other fiddle music tradition."

He comes by his sixth sense for rhythmic subtlety honestly. Neil grew up hanging out at his fiddler father Ed'

s lively sessions and ceilidhs, hearing master players from Scotland and Cape Breton. At concerts and festivals Ed organized as the long-time head of the Boston Scottish Fiddle Club, young Neil would sit enthralled. He soon began playing along.

As an accompanist and as a member of Highland Soles, the Pearlman family band, Neil has been moving to and making Scottish music professionally for more than a decade. A step dancer from toddlerhood, Pearlman learned the complex footwork that accompanies Scottish tunes from his dancer mother. He danced as part of Cape Breton fiddler Natalie MacMaster's touring group at the tender age of 11.

"On a very basic level, this music is dance music, just like jazz, funk, and lots of Latin genres," notes Pearlman. "To really understand the Scottish music tradition, you need to understand the dance tradition. You know where strong points in melodies fall if you're dancing. That's a point you jump or land. Especially in some of the more stylistically complex tunes, the dance phrasing is crucial to music phrasing." 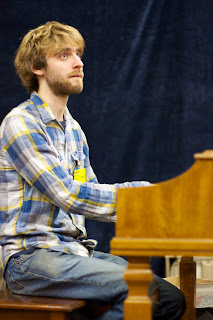 • Check out some of the songs here

This phrasing is vital in traditional strathspeys, powerful dance tunes unique to Scotland. Whether composing his own ("Alison House") or taking on tradition ("Highlanders"), Pearlman found the strathspey delightfully complex to arrange for piano without losing its distinctive feel. "Although in a strong 4/4 time signature, there is a subtle undercurrent of triplets, which is a difficult thing to work with if you don't want to lose the sharp drive," explains Pearlman, "but if it is approached right, you can  accentuate, rather than detract from the strathspey feel."

Triplets are not the only undercurrent in Pearlman's music. There's a quiet pressure of Pearlman's other musical fascinations: Latin music (he played trombone in a Cuban band); funk of the likes of Tower of Power and Earth, Wind, & Fire; and jazz. Though Pearlman knows traditional ballads ("Monymusk Lads"), airs ("Mill Mill O"), and Robert Burns songs ("Afton Water") like the back of his hand, he hears them with brass parts and bass lines.

"Even when I'm not performing in a band setting, I don't play totally traditionally," Pearlman states. "I've been bringing in all these influences anyway, for years. In fact, I put this project together so I could flesh out these other possibilities with other musicians who could play them."

The natural, playful way seemingly divergent sounds unite means Pearlman's pieces keep to their original spirit: the Scottish vibe, and the dancefloor joy. "I want people to take it intellectually, but sometimes if you start talking about melding styles or about fusion, people start thinking too hard," Pearlman states. "It should be about the groove, about enjoying what you're hearing." 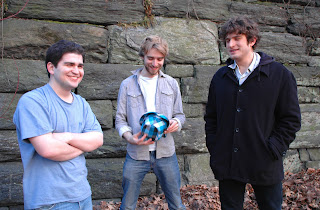