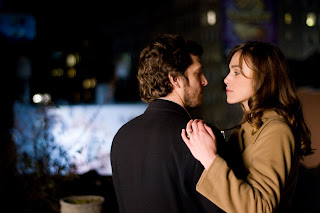 LAST NIGHT is a romantic drama about a young married couple in New York who face temptation on the same night.

While Michael (Sam Worthington) finds himself alone on a business trip with an attractive new colleague (Eva Mendes),

Joanna (Keira Knightley) encounters the other great love of her life (Guillaume Canet). Over just 36 hours, each spouse is confronted with choices neither expected having to make.