on May 13, 2011
eOne Films presents
BEAT THE WORLD
A Film By Robert Adetuyi

Beat The World features some of the most innovative and exciting hip-hop dancers and musical artists working today.

Filled with heart pumping moves and a sexy hip-hop soundtrack, Beat The World follows three dance crews from around the world, as they prepare to do battle at the Beat The World competition held in Detroit.

Fusion is the dance crew that comes from the streets of Windsor, a city that sits across the bridge from 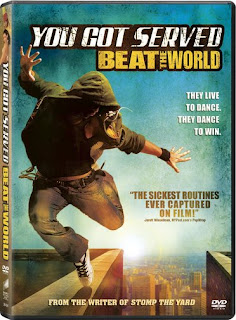 Detroit. With the competition being held so close to Fusion’s backyard, the crew’s leader, Yuson (Tyrone Brown), is determined to win. With the help of Justin (Chase Armitage), he invents a fresh dance style that mashes hip-hop and parkour. In a final showdown to become world champions and win $100,000 prize the three crews take on the world’s best. When they finally face off with one another, lifelong hopes, dreams, and even lives are at stake.

The film features choreography by the USA’s Sho-Tyme, Brazil’s Pink Ladies, Germany’s world-title dance crew, The Flying Steps, and Japanese sensation the Gogo Brothers. The phenomenal parkour talents of Chase Armitage and Nathan Barris from the UK’s 3Run Media are on show.

Canadian director Robert Adetuyi made his debut with the gritty drama Turn It Up, starring Pras, Ja Rule and Jason Statham. His other writing credits include Stomp The Yard and Code Name: The Cleaner.