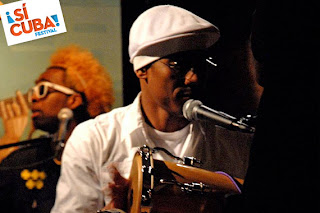 A tight, four-piece band blessed with palpable chemistry and magnetism, The Pedrito Martinez Group play Latin jazz with remarkable clairvoyance. The group’s leader, Havana-born percussionist and singer Martinez, is a star in his own right, having performed on six Grammy nominated records and collaborated with everyone from Latin legends Los Muñequitos de Matanzas and Eddie Palmieri to pop icons Sting and Bruce Springsteen. Martinez’s latest group is a streamlined take on the Cuban dance band, offering a transparent sound perfect for letting incisive vocals and percussion shine through. 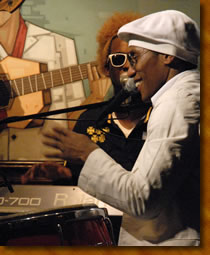 Martinez was brought to Canada in 1998 by saxophonist Jane Bunnett

. He toured with her group, Spirits of Havana

. The experience led Martinez to pursue his career in North America – a major turning point both personally and musically.

The highly successful Afro-Cuban/Afro-Beat fusion band,Yerba Buena, was an important project that featured Martínez in his element; singing, drumming, dancing, and collaborating on original band material. He recorded two albums with the group and toured the world opening for artists including the Dave Matthews Band, Willie Nelson and Ray Charles.

On the screen, Martinez has been featured in Fernando Trueba’s reputed documentary Calle 54. He was also featured in the films Havana Nights and Pinero, and three TV series: OZ, Third Watch, Dame la Mano, and The Cuban Americans.

In 2005, Martinez became part of an ensemble that would eventually become The Pedrito Martinez Group. The group is now based at the popular Guantanamera restaurant in midtown Manhattan.

If you miss BAM Café, most weeks on Tuesday, Wednesday, and Thursday Nights, you'll probably find the Pedro Martinez group playing at: