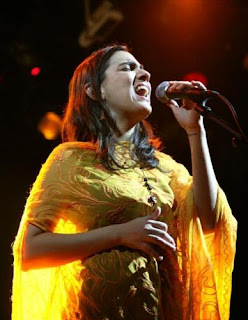 even non-Spanish-speakers into the heart of her anthemic refrains and irresistible rhythms. Marta and her group perform a repertoire of original compositions based on a vast amount of rhythms from Latin America.  On her songs, Marta mixes the joy of the Caribbean with the nostalgia of the Andes adding jazz and pop elements, taking the authenticity of South American indigenous folk music into a hip new realm.

, reflected the steady growth of an artist who, while deepening her art, maintains her own strong identity.  On "Musiquita

", Marta expands her vocal vocabulary, enlarging her unique sound to include percussive vocal improvisation and soaring vocalese. Her arrangements have become more sure and years of worldwide concert touring have solidified the sound of her band.  But it's Marta's unique voice, the quality and the simplicity that she draws from the bittersweet stories of the people of Latin America, that remains intact on "Musiquita".

Marta will be performing music from her vast repertoire as well as new songs from her newly released sixth studio album, El Corazon Y El Sombrero (the heart and the hat), which is an homage to poet Federico Garcia Lorca