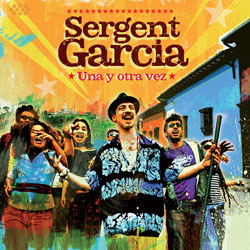 (Time and Time Again) will be released on May 17th in North America. Sergent Garcia's fans and critics in Europe have been raving about the album since it's European release earlier this month calling it, "massively danceable," and, "as powerful as ever."

A heavyweight in the European mestizo music scene, Sergent Garcia is a pioneer in blending the fiery Caribbean sounds of salsa, reggae, ska and dancehall with a punk attitude and continental style. Una y Otra Vez finds him traveling to Colombia to dive into what is currently the epicenter of some of the world's hottest sounds.

Sergent Garcia is currently in the midst of a massive European tour and will be bringing his signature salsamuffin sounds to North and South America this Summer.