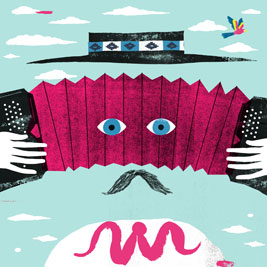 Toronto, ON – April 2011 – Albert Schultz, Founding Artistic Director of Soulpepper Theatre Company, announced that the company’s production of Fronteras Americanas will preview on May 6, 2011 and open on May 11, 2011 at the Young Centre for the Performing Arts.

Soulpepper Associate Artist, Guillermo Verdecchia and director Jim Warren, are collaborating once again, after eighteen years, to introduce the Governor General’s Award-winning Fronteras Americanas to new audiences. Fronteras is Verdecchia’s autobiographical journey of self-exploration to rediscover his roots. Born in Argentina, Guillermo’s family immigrated to Canada when he was only two years of age. He grew up in Kitchener, Ontario and struggled with the notion of displacement and identity as an Argentinean-Canadian. Verdecchia’s Fronteras Americanas is a brilliant and humourous examination of immigrant identity and exposes the raw nerve of living with one’s heart in multiple places.

Fronteras Americanas is written and performed by Guillermo Verdecchia under the direction of Jim Warren.

• Fronteras Americanas previews May 6, 2011 and opens May 11, 2011
• Young Centre for the Performing Arts, located at 55 Mill Street, Building 49, in the Distillery Historic District.
• Tickets range from $28 - $65 (plus HST) and are available by calling the Young Centre box office at 416.866.8666 or by visiting www.soulpepper.ca.
• $22 tickets are available for 21-30 year-olds at www.stageplay.ca.  StagePlay is sponsored by TD Bank Financial Group.
argentinian theatre distillery district soulpepper theatre theatre of latin american diaspora toronto theatre scene