Japan Benefit: Club D'elf ++ at the Brooklyn Bowl May 24

Club D'elf to perform at the True People`s CEREMONY for TOHOKU Disaster
Brooklyn Bowl - May 24, 2011

A benefit for relief efforts in Japan, proceeds will go to Think the Earth Project. 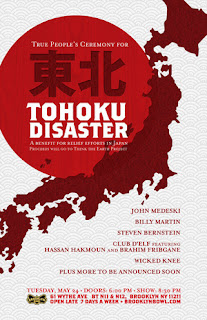 “Big in Japan” may be a cliché, but behind it stands the intense appreciation Japanese presenters and music fans have for deep and edgy music. Now a group of U.S.based friends and collaborators from the experimental, transcultural edges of funk, rock, and jazz are returning the love, by raising funds for the victims of the recent earthquakes and nuclear disaster.

Moroccan psychedelic travelers Club D’Elf, groove-oriented explorations from MAGO (John Medeski and Billy Martin), and the rag-time funk of Wicked Knee are leaping to the aid of veteran Japanese presenter Taichi Komatsubara to stage the first multimedia True People’s CEREMONY for TOHOKU Disaster at Brooklyn Bowl on May 24, 2011.

All proceeds go to the Think the Earth Fund for the Japan Earthquake, which channels money directly into the hands of a dozen frontline NGOs working with the most vulnerable and stricken disaster victims. In addition to the artists above, the benefit will feature musical performances, film, dance, and other creative offerings to support the Japanese people.

“In Japan, music fans listen differently. They get into the nuance of the music,” reflects master of the keys, John Medeski, an admirer of Japanese culture from childhood. “The last time Medeski Martin & Wood visited Japan, we did an acoustic show and played one of our sweeter, ballad-like pieces. It wasn’t the kind of thing that would have gone over well at a U.S. festival. But there, the audience was utterly silent. People had tears pouring down their faces. Their reaction really hit us in the heart.”