on May 04, 2011
Bury the Hatchet
Written, produced & directed by Aaron Walker 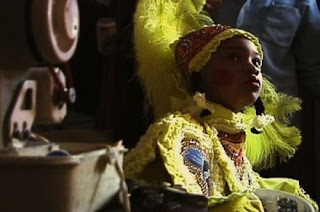 I've been so busy I just missed posting this for the HotDocs screenings, but if you're in the Big Easy for the New Orleans Jazz Festival, it's been held over at Chalmette Movies until May 5 for the opening weekend.

This jazzy documentary won awards in the festival circuit last year, and it's easy to see why. It's a character centered story whose timing was fortuitous - if I can use that word in such a context. The film begins about 7 months before Katrina, as the Mardi Gras Indians are deep in preparation for Mardi Gras 2005.

The Mardi Gras Indians are the descendants of runaway slaves who were offered shelter and hidden by the native population of Louisiana. One of the unique and rare songs you'll hear on the film is called "Shallow Water" - a reference to the fact that fleeing slaves would look for the creeks that ran into the bayous, thereby leaving no footprints for any pursuers to follow. 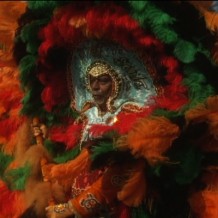 A fascinating culture developed in honour of that memory, with "tribes" led by Chiefs who lead their flock in the Mardi Gras parade. They don sequinned, bejewelled and embroidered costumes that are handsewn and take hours of labour, but it's clearly a labour of love.

We meet several of the Big Chiefs in this engaging film, and they become the characters that lead the story. There's Big Chiefs Alfred Doucette (pictured left), Monk Boudreau and Victor Harris (pictured below), among others, and some footage of Tootie Montana, the Biggest Chief of them all, who says, "They want to be prettier than me."

Nowadays the rivalry is about who's got the prettiest costume, but decades ago, the men remember a time in the 1950's when the annual parade, centred around an old black/Creole neighbourhood on Claiborne Avenue (a neighbourhood decimated when the Interstate 10 overpass was constructed), brought out thugs and gangsters who added violence to the night's revelries.

It's still a community that doesn't get the recognition it should, and one that's in danger of disappearing altogether. As the cameras roll, the police raid a St. Joseph's Night celebration. The festivities come six weeks after Mardi Gras, and in 2005 the police decided to break it up with a raid on the park where it's held. 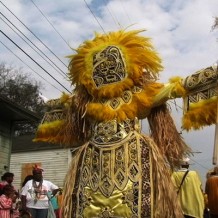 Sadly, the cameras are also rolling as Tootie Montana collapses and passes away at the City Council meeting held to discuss the matter.

The film looks at the older generation of Big Chiefs as they try to pass along the traditions - including its unique music - to a younger generation, and their struggles to rebuild after Katrina hits. Old rivalries are laid to rest (the hatchet of the title) and the beat goes on.

"Life goes on - you're not supposed to stop just because you lost everything," says Big Chief Monk Boudreau.

You'll be thoroughly smitten with both the music and the charisma of  Boudreau and the rest as they pick up and keep going no matter what.