Morocco's leading Gnaoua masters, representing the major Gnaoua centers of Essaouira and Marrakech, will present an unprecedented performance of this entrancing and mystical music. They include Mustapha Bakbou and Mahmoud Guinea, among others. Originating in sub-Saharan Africa, the 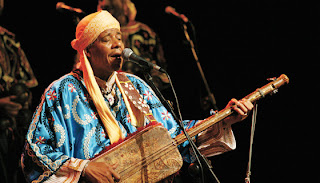 music serves as both a prayer and a celebration of life with strong, distinctive rhythmic beats and acrobatic dancing.

The master musicians will be accompanied by Hassan Hakmoun, a Moroccan-American Gnaoua musician and innovative performing artist who will bring contemporary elements from funk, hip-hop, and reggae to further ignite this classic musical tradition.

Neila Tazi, director and producer of Essaouira's Gnaoua and World Music Festival, will offer a behind-the-scenes look at the Festival and its development, and share stories about the Gnaoua artists and their rich cultural tradition.

World Nomads Morocco Festival, April 30–May 31
Under the High Patronage of His Majesty King Mohammed VI