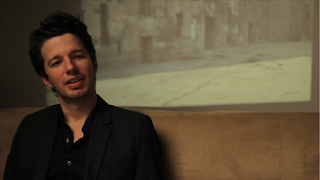 Federico Aubele returns to a smoky realm of acoustic guitar licks, heavy rhythms and sinister dub atmospherics for his fourth studio album, Berlin 13. The record pulls from the personal transformation Aubele experienced in his time living in Berlin and the vibe of a city strongly associated with electronic music.

Berlin 13 features collaborations with Natalia Clavier, Ka, Mauro Refosco and Jesse Harris. To set the tone for this album, Aubele revisited his deepest musical influences, focusing on those he believed essential in his formation as an artist. From the backing beats to the musique-concrete samples, and the nylon string guitar layered with his baritone voice, the result is a blending of the elements in his unique style.

“I had a formal musical education. One of the things I rescue from those years, is being exposed to a lot of 20th century composers and styles. I was fascinated with Schoenberg’s atonalism, Stockhausen’s explorations in electroacoustic music and musique concrete, Ligeti’s tone clusters, etc. The core of my music is a combination of electronic music, dub, classical guitar and the experiments those composers conducted in the 50’s and 60’s.”