The NFB at HotDocs: St Henri, the 26th of August

St Henri is an interesting film that covers a day - the 26th of August to be exact - in this neighbourhood in the southwest end of Montreal. And I'd call it a "working class" neighbourhood, but working, barely 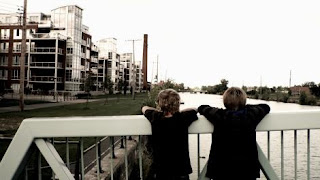 working, working too hard to make ends meet and not working at all is probably a more apt description.

The film begins with a ditty about having nothing but still being able to laugh, and the film goes on to flesh out the notion in an intimate portrait of a neighbourhood struggling with the combination of decline and condo-ization through its denizens. We follow Doris on her day - on welfare, she raids recycling bins for bottles and store garbage bins for discarded fruits and veggies, stopping to chat with friends along the way. It's a sunny day, she notes, and it's pleasant to walk in the nice weather. "We're all on welfare here," she remarks, pointing out that only a thin alley way separates the rich who live in new condos and the poor on the other side. There seems to be no middle ground - or middle class - here.

Other characters emerge, from an engaging elderly couple out for a stroll - These are the best years of our lives says the woman as they walk hand in hand - to Lee the shopkeeper, a hairdresser, kids going to school, the delivery guy and many more. The action centres around hood's landmarks, like the Lachine 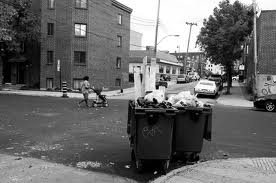 Canal, Atwater Market, and busy rue Notre Dame. The place that emerges slowly from all their voices is one of  interconnected lives, a place where everybody knows everybody and simple pleasures abound: digging for worms to fish, hanging in the coffee shop, dancing with your friends on your birthday.

There are a few outside voices who interject,like the garage owner who wouldn't dream of living in "hell". A kid's homemade fort in the woods is destroyed, its location littered with used syringes. One woman reminisces about the days decades ago when she lived with 25 other people in a 3 bedroom apartment.

By evening, the children are off the street and the eccentrics come out - a club of electric low rider enthusiasts who spend up to $15K on their beloved machines and drive them around the darkened streets. There's a woman who explores the sewers for hidden treasures, amateur knife throwers, a basement band. These are people with a DIY attitude, who've made something of their lives from whatever fate has tossed their way.

It's an engaging portrait of the determined resilience of a people and a neighbourhood often dismissed and thought of as downtrodden.

Historical note: the film is an update of Hubert Aquin's 1962 "À Saint-Henri le cinq septembre". On September 5, 1962, Claude Jutra, Michel Brault, Don Owen and Arthur Lipsett roamed the streets of St-Henri with other emerging National Film Board filmmakers in a style now known as "direct cinema".